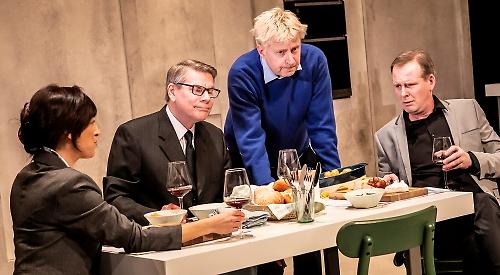 BORIS Johnson was the editor of the Spectator and the Daily Telegraph’s star columnist.

But he wasn’t content to go down in history as a Fleet Street legend.

Nor was he prepared to sit on his laurels as the MP for Henley.

No. He wanted a statue in Parliament Square. Maybe even Trafalgar Square.

Having declared at a young age his ambition to be “world king”, he arguably still has time to achieve this unlikely sounding goal.

A number of biographies have already been devoted to Boris’s life and times.

We can look forward to them being revised and updated in due course.

Boris will no doubt get around to writing his memoirs one day. In the meantime, why not a play?

Let history record that the crisis that eventually helped propel Boris through the front door of Number 10 was not of his making — even if he had played a bit fast and loose with some of the finer details of his despatches from Brussels back in the day.

Jonathan Maitland’s play takes as its starting point a real-life dinner party that Boris and his wife Marina Wheeler hosted at their Islington home in February 2016. The guests were Michael Gove, Sarah Vine, and the Evening Standard’s owner, Evgeny Lebedev.

The main topic of discussion was, of course, the then impending referendum on Brexit.

While Gove had been a significant player in David Cameron’s government, the same could not really be said of Boris.

But at this vital juncture in our national life, both men faced a momentous decision over whether to back “leave” or “remain”.

We all now know which way they jumped — but this was the moment of truth.

Maitland adds to the drama by freezing the “real life” action and having Will Barton’s Boris banter with the shades of Winston Churchill, Margaret Thatcher and an audience-conscious Tony Blair.

There are some big laughs. At the very start of the play, just ahead of being interviewed by Tim Wallers’s Huw Edwards, Boris frantically ruffles his hair and untucks his shirt.

When an effusive Evgeny Lebedev tells him “You can put the ‘Great’ back into Great Britain because you are a great man,” Barton’s jocularly deadpan “Good point” is so convincing a response that you briefly wonder if the real Boris has snuck on to the stage.

The same could almost be said of Emma Davies’s Mrs Thatcher — whose entry into the drama is one of the production’s visual coups.

In the event it is Bill Champion’s Churchill who seems to persuade Boris to plump for leave when he intones: “Sometimes it is better to lose honourably than to win.”

The suggestion that Boris was shocked by the result of the referendum is fair play, but in that case the notion that his choice of side was cynically calculated to secure career advancement doesn’t really stack up.

Set in 2029, the second half of the play proved of rather less interest as far as this reviewer was concerned — though having Michael Gove take holy orders was pretty funny.

Suffice to say, I’ll look forward to reading about what really happened on that fateful night in 2016 in Boris’s memoirs.