BBC sitcom adaptation was a well-directed taste of nostalgia 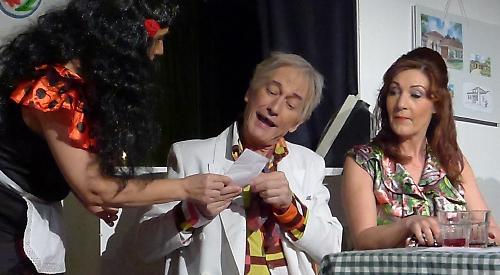 Are You Being Served? | HAODS Studio | Friday, February 21

THE Henley Amateur Operatic and Dramatic Society has made dinner and theatre in their studio an annual event.

They take a popular BBC sitcom and give the audience a real taste of nostalgia.

These evenings have proved extremely popular and on the night of my visit the studio was packed to capacity.

Stephen Luscombe treated us to a traditional Spanish meal of potato and chorizo soup accompanied by sourdough bread, followed by chicken and lobster paella and Catalan cream to finish.

This production of Are You Being Served? had been well cast and there were some super performances from all involved.

The cast had clearly studied the characters and portrayed them as the orginals — particularly David Wilson as Mr Rumbold, who appeared complete with bald wig, sticking out ears and
thick-rimmed glasses. I actually remember seeing the episodes they had selected and their presentation was every bit as funny as I remember them.

Director Julie Huntington had once again created a fast-paced humorous piece of theatre that was immense fun.

She certainly has the knack of making the most of the limited space available to her.

There were some delightful touches throughout, and Miss Brahms and Miss Slocombe measuring Mr Berk’s inside leg and Mr Humphries’s arrival as a parcel delivery were extremely well directed.

Entrances and exits had been well contrived and contributed greatly to the fluidity of the action.

Monica and Keith Ackland-Snow, who were responsible for designing the original set, played a large part in helping to create a design that worked famously in this small area.

It had been sturdily built and I was particularly impressed with the lift and its practical doors and the clever effect of it being stuck.

The final scene was great, with all the actors playing their instruments and giving us a lively and entertaining rendition of “Ah! Sweet Mystery of Life.”

This was an enthusiastic, energetic performance and I cannot wait to see what HAODS do next.