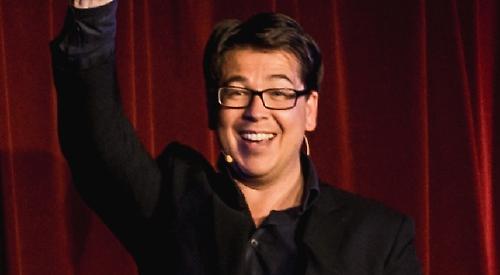 MICHAEL MCINTYRE received a standing ovation on his return to the Kenton Theatre in Henley.

The comedian performed an hour-long “work in progress” show on Monday evening to prepare for his forthcoming arena tour.

He last performed at the New Street venue as a rehearsal for his Happy & Glorious arena tour in 2015 when the tickets sold out in 30 seconds.

This time, McIntyre took to the stage wearing glasses and his trademark black suit and received a huge cheer from the audience.

He was carrying papers with ideas for jokes that he tested out on the crowd. Topics included the coronavirus pandemic, passwords, dishwashers and going to the opticians.

McIntyre, 45, said he had missed performing live and became bored during the lockdowns.

He would even get excited when a parcel arrived. This gave him an opportunity to pose for a socially distanced selfie with the delivery driver but in fact the Amazon man only needed a photo of the house to prove the package had been delivered.

McIntyre said that he was already an anxious person before covid-19 and joked about taking a lateral flow test, saying this meant having to put a swab up his nose to the point where it “touches your brain”.

At the end of the show, when a few members of the audience gave him a standing ovation, he looked at those still seated and joked: “These people like me more than you.” His final words were: “Goodbye Henley and stay safe.”

Theatre manager Simon Spearing said: “He was in really good spirits and he said how happy he was to be back. It was brilliant to see a room full of people laughing and enjoying the show after the last 18 months of having the place empty all the time. It felt quite emotional.”

Julie Huntington, who chairs the Kenton trustees, said: “It’s the first time I’ve seen him. He was very good and made no bones about the fact that he was warming up.

“It’s all about trying to get audience reactions but he got a big reaction just by stepping on to the stage. It was a really fun evening. He can talk about anything and make it funny.”

Support act Jake Lambert performed for 20 minutes. Members of the audience were encouraged to wear face masks inside the building but these could be removed once people were seated.