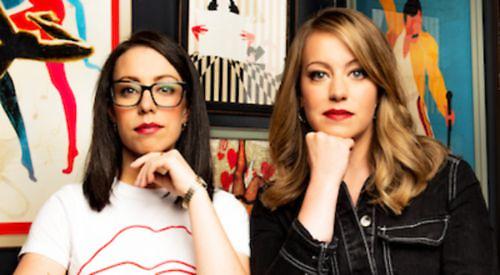 THE coronavirus pandemic has provided few reasons to laugh but Flo and Joan are about to change all that.

The comedy music act consisting of sisters Nicola and Rosie Dempsey will be performing a collection of new songs written over the past two years when they appear at the Kenton Theatre in Henley on Sunday.

Their show, called Work in Progress: Sweet Release, is a rehearsal for a nationwide tour beginning next month.

“All these songs were inspired by anything that you can have been inspired by over the last two years,” says Nicola.

“Because the tour is so big, there are lots of places that we haven’t played before, so we’ve thrown in some of the classics too.”

The pair are known for their catchy, upbeat melodies juxtaposed with undertones of a dark, dry sense of humour.

Nicola says: “When we’re trying new material for the first time to see if it works, there are some songs that you can kind of get away with being a bit fluffy because you know there are specific jokes that have to land and, as long as you get those in, you can get a good gauge on whether the song works.”

Rosie explains: “Sometimes you can just listen to a song and be like, ‘that song’s funny but they don’t know it is’.”

Nicola, 31, and Rosie, 28, live in London but grew up in Portsmouth and also lived in Toronto for a few years. They weren’t especially close as children.

Nicola reveals: “We were sort of indifferent to each other. The only time we talked to each other was to sort of have an argument over who got the remote control.”

Nicola studied classical music — their mother Alison used to be a piano teacher — but Rosie went down a sporty path.

She says: “I learnt piano when I was really young and I got to grade 1 and then I stopped as I wanted to do sports and to learn the trumpet because it was more fun. I’m learning the piano now because I feel like I have to make up for the time that I didn’t do when I was younger.”

The sisters came back together after leaving home.

Nicola says: “As we both went to university, we still had things in common, like music.”

“And theatre,” adds Rosie. “Even though it wasn’t cool, you’d be like, ‘Have you heard the Wicked soundtrack?’ as if we were 13 years old. ‘Um, yeah, I have heard it but don’t tell anyone’.”

“Then you’re like, ‘Oh, this is the thing that we get to share, that’s quite nice’, and then, 10 years later, here we are working together.”

The sisters were inspired by Victoria Wood.

Rosie says: “Let’s Do It is the way in and we listened to a few of those songs when we were younger and that probably definitely started us off and then when we were teenagers, Tim Minchin. Then people kept saying, ‘Oh, you’re like Flight of the Conchords’, and we had no idea who they were — I think we were maybe too young but now we’re very well versed in them.”

Nicola estimates that they have put in something like 3,000 hours of practice, curating and perfecting their songs. “I mean, our mum used to shout at us for not practising the piano,” recalls Nicola.

“She used to say, ‘If you don’t practise every time that you do it, you’re just practising again, you’re never actually learning’.”

The advice was wise for their act, too, according to Nicola.

“There are songs that you have to know inside out, back to front, off by heart because if you stumble, then an audience is like, ‘Oh, no, they’re not capable of this, they’ve bitten off more than they can chew’.”

The sisters hit all the notes on the emotional spectrum in their songs. Little Flo & Joan, in particular, is a melancholy yet heart-warming ode to their younger selves, imparting a variety of
wisdom. So what advice would they give to young people trying to follow in their footsteps? Rosie says: “Hands down, my biggest regret is giving up the piano, so, tell them to keep on going.”

Nicola says: “Just keep doing it and have fun. Listen to what your teacher says, but also find things that you like playing
yourself.

“I studied classical music all through university and did not enjoy it. It was only when I started finding my own music that I liked playing that I was like, ‘Oh, this is fun, I do really enjoy this’.

Rosie adds: “When we started, I was like, ‘Oh, this’ll just be like fun and just a platform for something else but I haven’t not enjoyed it yet.”

• Flo and Joan — Work in Progress: Sweet Release is at the Kenton Theatre on Sunday at 7.30pm (running time is 110 minutes with a 20-minute interval). Tickets cost £12. Call the box office on (01491) 525050 or visit www.kentontheatre.co.uk
The duo will also be playing at the Norden Farm Centre for the Arts in Maidenhead on June 9 and 10.