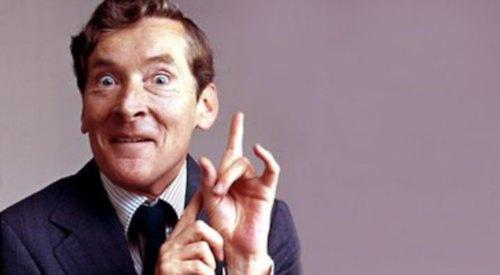 DO you miss the nasal, whiny, camp-cockney inflections and smirking innuendo of Kenneth Williams, comedy actor, raconteur and diarist?

Colin Elmer’s one-man homage to a national treasure comes to the Kenton Theatre tonight (Friday) — and the resemblance is uncanny.

He not only wrote Cult Figure — Kenneth Williams but also stars and directs the show, which is presented by the Apollo Theatre Company.

The company is also touring Round the Horne, again with Colin as Williams.

The 37-year-old has loved the art of mimicry from a very early age and can recall watching cartoon series Willo the Wisp, which was voiced by Williams.

“I remember my mum sitting me down, watching this cartoon and she would say, ‘Oh, he’s that man off the Carry Ons’.

“I was probably about four or five at the time and going, ‘Which one is he playing?’

“‘He’s playing all the characters’.

His interest was really piqued listening to old radio episodes of Round the Horne and Hancock’s Half Hour with his father.

Colin says: “I was fascinated by all these different voices and the amazing vocal range that this guy had but at the same time he was very distinctively Kenneth Williams.”

In 2015, Colin played Williams in the Apollo’s 50th anniversary production of Round the Horne and reprised the role for a remake of Hancock’s Half Hour in 2019.

In March 2020, he was preparing to go on stage with Round the Horne in Edinburgh when the first lockdown hit.

Colin recalls: “We knew that evening the show had been
cancelled.

“They said, ‘Oh, we can only have up to 400 people in the theatre’ and our numbers that evening were something like 398.

“Tim Astley [the director], said, ‘Right, stop selling tickets, otherwise we can’t do it or you’ll have to turn people away’. And, of course, that evening BoJo made the announcement and everything went dark within half an hour.

“We thought, ‘Oh, it’ll be six months’ time and then we’ll be back on it again’ and then it was another six months and then, of course, we had the second lockdown.”

Colin took up painting and decorating to make ends meet during the coronavirus pandemic, including a job decorating a friend’s empty flat in Kings Cross.

It transpired that Williams had lived in the flat upstairs.

“It was just a lovely coincidence,” says Colin. “I was decorating for a family friend, who is a priest, so I said, ‘Oh, God, if you get called by the person upstairs asking for an exorcism, it’s my fault’ because I was painting away and listening to Round the Horne.

“It was partly to think of sketches — what could we put in that we hadn’t already used or what material could I be using for the one-man show.

“The poor b***ers upstairs and downstairs are thinking, ‘Oh my God, it’s the bloody ghost of Ken come back to haunt me after all these years.”

So what would the great man himself have made of the pandemic? Colin reckons: “I think Kenneth would have said, ‘Well, I’m very socially distanced anyway, so it doesn’t really make much of a difference to me, you know.

Cult Figure, says Colin, is a celebration of Williams’s life and he revels in recreating the many facets of the actor’s personality.

These included loneliness, despondency and a sense of underachievement while he was making others laugh.

Williams died in April 1988, aged 62, from an overdose of barbiturates. A coroner recorded an open verdict as it was not possible to establish whether his death was suicide or accidental.

Colin says: “There’s that sort of cliché of the tears behind the laughter, the darkness behind this very light, albeit very intellectual, very funny man.”

Williams’s diaries, which were published in 1994, revealed that
he had suffered from manic
depression.

Colin says: “There’s always that curiosity about Kenneth, that one minute he was fiercely up and very manic and talkative, and then he would go home and write a diary and go, ‘I had a rotten evening last, absolutely dreadful, and I spoke a load of sh**.’ He was man of
contradictions.”

The impersonator was given more insights into the man from his friends.

Another had served on the board of Equity with Williams, who was a militant supporter of actors’ rights.

Colin says: “In meetings Kenneth would always be passing him notes and it would be something absolutely filthy to try to make him laugh. He was very, very serious one minute and then very silly the next.

“In straight plays, the minute he got bored, he would just go down to the front of the stage and start chatting to the audience.

“He would do a couple of little quips and jokes, then go back into the scene and turn to Jennie Linden, or whoever he was acting with, and go, ‘Right, your turn’.

“It’s like, oh, right, thanks for that. You think, ‘Oh, my, poor bloody actors, appearing with him’.”

Even so, Williams’s command of an audience was such that producers could use it to their advantage.

Colin explains: “On things like Just a Minute, if the show wasn’t going well, Kenneth would stare up at the tech box and see the producer raise his hands and he’d just go off on one, you know, ‘I haven’t come all the way from Earls Court to be made fun of’ and he would just get the audience on a roar for a couple of minutes.

“Then, when it was enough, the producer would lower his hands, he’d clock it and they’d get on with the show. As [producer] Bill Cotton said, ‘I’ve never known an actor or a comedian who could literally pick up 600 people like that and drop them like that.”

• Round the Horne is at South Hill Park, Bracknell, on Sunday, February 20 at 3pm.
southhillpark.org.uk