I only ever went into stand-up for a laugh 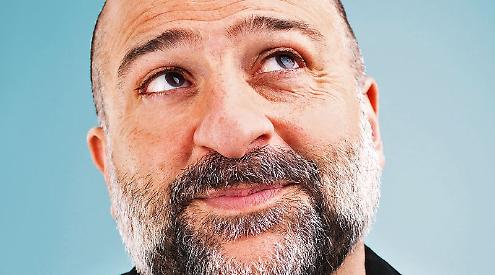 EVEN after almost three decades in showbiz, comic Omid Djalili still doesn’t like to watch himself perform.

The man whose first comedy success was appearing at the Edinburgh Fringe as “short, fat kebab shop owner’s son” says he still hasn’t watched himself on either of his appearances at Live at the Apollo.

“But that’s probably more to do with my shape and choice of clothes than what I was actually saying,” he laughs.

Omid, 55, admits he had to be dragged “kicking and screaming” when he was offered his own quiz show, Winning Combination, by ITV in 2020.

He recalls: “I’d appeared on a celebrity version of The Chase with Bradley Walsh and they offered me this new format straightaway in the green room afterwards.

“I avoided them many times but they said to just come and watch while they performed it for me.

“So I did and I loved it and the rest is history. I’ve always had a great respect for game show hosts because it uses three or four different parts of your brain — I just didn’t think I could do it myself.

“It took me a while to get into it but once I understood the machinery of it I totally bought into the experience. We’ve done a second series too and, if I’m honest, I can’t wait to do a third.”

Omid is equally excited about being back on the road with his Good Times Tour, which comes to the Reading Hexagon tomorrow (Saturday). It will be a nostalgic return to the venue for the comedian who appeared there only last year for the final recording of I’m Sorry I Haven’t A Clue with the late Barry Cryer.

He says: “It was an amazing night. He was quite frail but the audience loved him.

“When they introduced him, the roar from the audience was so loud that it totally picked him up and none of us knew that he would be dead in three months’ time.

“Stand-up is the best job in the world. I did some Zoom gigs during the pandemic and enjoyed them but you just can’t beat the live experience.”

“The show will be a celebration of stand-up comedy and the joy of coming together as a way of catching up on the fun we’ve missed out on,” he says.

“I remember having a conversation with one of the producers of the Royal Variety Performance who said he found someone on stage all by themselves doing stand-up comedy more powerful and magical than a highly entertaining musical number with 60 people dancing.

“A stand-up can conjure 1,000 images because the audience’s mind is working while they’re listening. So basically my new show is a 1,000 images in an hour-and-a-half.

“I was told early on by comedians I respected that it takes about 25 years to find your voice — you can’t just stand up and be funny.

“I was lucky that I fell into stand-up comedy, an industry that thousands try to get into. I just did it for a laugh and if you make it through why would you ever discard it?

“Careers are always hard to navigate but in comedy, as with most things, you’re never the finished
article.

“So it’s great to be 55 years old and still know definitively that there’s still so much more room to grow and improve.”

Alongside his comedy career, Omid has also appeared in numerous films, including The Mummy, Gladiator, Notting Hill and
Pirates of the Caribbean: At World’s End.

He says he has usually been cast as a Middle Eastern background character, as in the James Bond film The World Is Not Enough, where he played the part of “second Azerbaijani oil pipe attendant”.

He also managed to pack quite a lot in during the last two years, including moving his family out of his native London and relocating to rural Suffolk.

A lifelong Chelsea fan, he is now a regular on the terraces at Ipswich Town FC.

His biggest challenge, though, was brushing up his second language of Persian when he was invited on a programme broadcast by the BBC’s World Service in Iran.

He says: “I acquainted myself with a whole new audience and then they asked me to guest host an episode.

“The process of delving into my culture in the language of my heritage but with the brain of a stand-up comedian, finding the nuance and turns of phrase in the language, was both challenging and exciting.

“It’s hard enough to do that in English but to do it in your second language was a thrill.

“Now there’s an offer to do my own show, which is nothing short of extraordinary.

“To have my own Persian language talk show on BBC Persian, beamed directly into Iran, with a potential global audience of 30 to 40 million, is quite a result after doing something essentially just for the hell of it during lockdown.”

• Omid Djalili: The Good Times Tour is at the Hexagon, Reading, tomorrow at 8pm. Tickets cost £27 and the show contains adult material suitable for ages 16-plus. For more information and to book, call the Reading Arts box office on 0118 960 6060 or visit www.whatsonreading.com