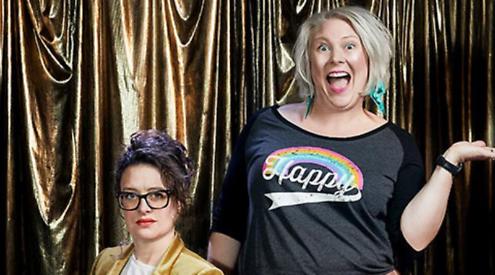 AS the saying goes, they grow up so fast, don’t they?

Children are once again the subject of the latest show by comedians Ellie Gibson and Helen Thorn, who will be performing twice in Henley next week.

But the self-styled Scummy Mummies, who will celebrate 10 years as a double act next year, have moved on from baby poo and the terrible twos to the difficulties of rearing older children and, of course, they joke from personal experience.

Ellie is mum to 11-year-old Charlie and seven-year-old Joe, while Helen also has two children, Matilda, 13, and 11-year-old Hugo.

The women became friends when Charlie and Hugo, who were born nine days apart, were about a year old.

Ellie had returned to work two days a week after her maternity leave when she decided to take a course in stand-up comedy.

“I just thought, ‘Well, I’ll try it and if it doesn’t work out it doesn’t matter because I’ve got my baby at home’.

“But I really enjoyed it and then — I think it was at my third ever gig — I met Helen. She was doing a gig and it was awful as it was in a shipping container in Deptford.

“It was so cold that the audience sat on crates and they had blankets to keep them warm. There were about eight people there.”

Ellie was wowed by Helen’s material and they ended up chatting, discovering that they’d had the same midwife when Ellie’s first and Helen’s second children were born.

“We became friends,” she says. “We started a podcast and then Helen was like, ‘Why don’t we do a live show?’ and I was like, ‘Oh, because that sounds hard and no one will listen’ — I was really British about it.

“But she’s very Australian and sunny and optimistic. She said, ‘No, we’ll give it a go’.”

The Scummy Mummies were born with an Instagram page and their own parenting podcast.

Ellie recalls: “I was looking for a podcast and all I could find were these very serious people, usually American, talking about what car seat to buy.

“I was like, ‘Where are the funny people talking about, you know, the sh** behind the radiator or the Weetabix on your bum?’

“When I met Helen, we talked about that stuff all the time.

“I think it has changed — you can now find pictures on social media of what it’s really like as well as the nice pretty pictures. It’s a bit more balanced. You can find realistic pictures of motherhood and ones that aren’t just about, ‘Whoa, I’m on the Prosecco’.”

The comedians, too, have moved on from those early years.

“There was a lot of ‘wine o’clock’ stuff a few years ago but we’ve moved away from that quite consciously — we don’t want to encourage alcoholism,” says Ellie.

“I like looking at pictures of people’s fridges being really beautifully organised and I find it very soothing to see those White Company homes with cream sofas that I’ll never own — there’s room for both.”

Ellie confesses that she and Helen have both been through dark days but they supported each other and so managed to maintain a positive outlook.

Her second child, Joe, was born two months premature so she does some work for a charity called Borne, which is funding research into the prevention of pre-term birth.

Meanwhile, two weeks before the first lockdown caused by the coronavirus pandemic, Helen found out that her husband had been cheating on her so she kicked him out.

At first, she could only deal with being a newly single mother one day at a time, but she then turned things around to the point where she wrote a bestselling book called Get Divorced, Be Happy (how becoming single turned out to be my happily ever after).

The women say one of the things they love about their show is how they relate to their audience and vice-versa.

Ellie explains: “There is one element that has never changed and has been in every single show we’ve done — the Scummy Mummy confessions.

“We give all the audience a card and a pen and we get them to write down a funny story.

“When we started, we would say, ‘Write a story about parenting’ so we got the poo explosion in the middle of the wedding or Febreze-ing the school PE kit, things like that.

“But as the show has evolved and we’ve got older, it has become about broader things and just generally embarrassing yourself.

“The audience write down a confession, we read out the best ones and we get the audience to decide who’s the winner and that person wins a prize. I love it — it’s my favourite bit of every show, which is annoying because it’s not the bit we worked hard to come up with, bought costumes for and learned and rehearsed.

“It’s the truths that people say. The real-life stuff is funnier and more unbelievable than anything we could come up with and, of course, it’s different every time.

“We’re very excited to come to Henley as we’ve not been before. We’ve heard it’s lovely and that it’s posh.

“We’ve been touring the country for nearly 10 years now but we have found that often the poshest audiences are the filthiest and the scummiest. They’re up for it and they don’t mind being called out for that.

“We recently went to this wellness festival called the Big Retreat, near Carmarthen. It was very posh and we had confessions like, ‘I took my Steiner school child to a drive-through McDonald’s’, which we thought was lovely.

“Another lady was like, ‘I wanted goose for Christmas. Nobody else wanted goose, so I bought a goose and cooked it and told everyone it was a South African turkey’.

“I’m from Catford and you don’t get those sorts of confessions when you do the show in Catford but I love them.

“I’m hoping the people of Henley will have some good scummy stories to share and come up for it. It’s just a big party and is going to be a laugh.”