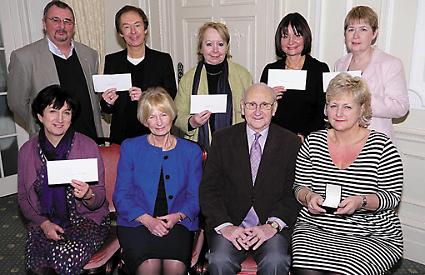 THE charity action group at Phyllis Court Club in Henley has donated £24,000 to five charities.

The Sue Ryder hospice in Nettlebed received £16,000 and the remaining £8,000 was split equally between the Kingwood Trust for people with autism, the MS Societys therapy centre in Henley, Club SC in Sonning Common and Henley Youth Centre.

The group raised the money with a series of events during last year, including three fairs, which raised £10,571. A raffle at jeweller Jacobs of Readings 65th anniversary celebrations raised £1,074. The company also donated a diamond necklace to Sue Ryder, which will be auctioned at one of its fund-raising dinners.

In the previous year, the group raised £24,000 for the Helen and Douglas House childrens hospice charity. Group chairwoman Diana Pearman said: Never did we envisage that we would achieve such a total again.

The committee were delighted at the amount we raised and that the members of Phyllis Court Club were so generous with their donations.