Worsfold grabs hat-trick to lift side up to second place 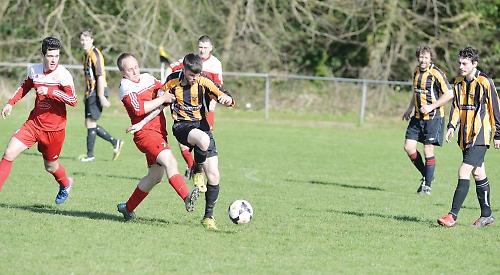 JAMES WORSFOLD scored a richly-deserved hat-trick as WOODCOTE/STOKE ROW overcame a dogged WOODLEY UNITED RESERVES side as they extended their unbeaten run to eight games rise two places to second in the league.

From the start the home team dominated the Premier Division encounter and they took the lead after 10 minutes.

Frank Dillon brilliantly rode two challenges as he cut in from the right and his right-foot cross was bundled home by Worsfold.

On 20 minutes Woodcote doubled their lead and Worsfold was instrumental. He received the ball from Dillon and his pass left Jake Dillon with an easy tap-in.

Woodcote pressure continued for the rest of the half, with Woodley’s only meaningful shot coming after 35 minutes. More chances were to follow with Worsfold and Jake Dillon both going close on two occasions.

As the half entered added time Woodcote effectively put the game beyond Woodley with a third goal from from Worsfold. A Frank Dillon free kick was only half-cleared and Worsfold popped up to finish from close-range. At half-time Woodcote brought on Jonny Summers for the injured Tommy Chapman and Summers made an immediate impact. In the second minute of the half, with almost his first touch, he scored with a close-range header from Jake Dillon’s brilliant overhead cross.

After 53 minutes Worsfold completed his hat-trick after Summers’s shot was parried by the keeper and Worsfold reacted first to head home from close-range.

Midway through the half, substitute Mike Davis, on for the hat-trick hero, produced a great finish from an assist by the impressive Summers.

The scoring was completed on 70 minutes with a second goal for Summers. Davis returned the compliment supplying the pass for a great strike by Summers from the edge of the box.

Elsewhere in the league, ROTHERFIELD UNITED lost 3-0 to UNITY.

They took the lead early in the game as stand in goalkeeper Mark Sumner went to make contact with a cross but could only get fingertips to it and Unity’s attacker stabbed the ball in. They doubled their lead in the 44th minute when a long ball over the defence was chased by Prince Massaquoi before firing into the near post.

The second half saw the visitors enjoy more possession but they found it difficult to break down the Unity defence. Then Massaquoi raced through on the counter attack and fired through substitute keeper Stannard’s legs to make it 3-0.

Meanwhile, ROTHERFIELD UNITED RESERVES played a friendly against WHITE EAGLES RESERVES after their Division 3 clash was called off due to there being no referee.

The hosts cruised into a 3-0 first-half lead with goals from player/manager Lee Howland, Dan Priest and Bailey Fullbrook.

After the break, Fullbrook added a fourth before White Eagles pulled back three goals to make a final score of 4-3.

l GORING UNITED RESERVES were knocked out of the Berkshire Trophy Centre Junior Cup 3-0 to SOUTH READING. Jordon Sawyer bagged a brace for the visitors while Ibrahim Koroma added a third to put the game beyond doubt. Reading will face Twyford and Ruscombe in the final.