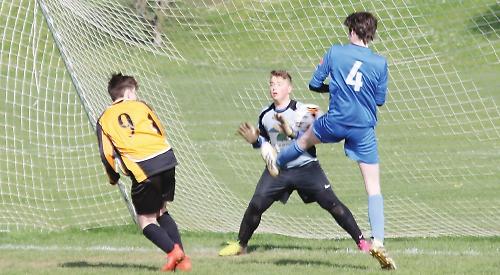 ROTHERFIELD UNITED U16s pulled off a an impressive 6-1 win at THATCHAM TOWN HARRIERS U16s on Sunday in Division C of the Oxford Mail Boys’ League.

The visitors took the lead after just 20 seconds. Thatcham took the kick-off and played back to midfield, but Rotherfield’s Harry Green was fast off the line pressuring the midfielder who made a mistake allowing him to tackle and drive the ball past the midfield and through the defence to play the wide to Gabe Langford who calmly slotted it home.

Ten minutes in Harry Roe crossed the ball high across the goal to find the head of Green who put the ball between the defender and keeper to put Rotherfield 2-0 up. Another goal from Green put Rotherfield 3-0 up at the interval. In the second half Langford fired home his second before the hosts pulled a goal back. Green then completed his hat-trick to make it 5-1.

In the last five minutes, Green and Langford were rested, with man-of-the-match Owen Attree moving into the striker’s position, and having narrowly missed the goal redeemed himself with a header from another cross from Roe to make it 6-1.

The result leaves United in fifth position in the table but they have their eyes set on third place with several games in hand.

ROTHERFIELD UNITED REBELS U14s secured a further three points in their bid for promotion from Division 2 of the East Berks League on Saturday thanks to a 4-0 win at home to TWYFORD COMETS U14s.

United took the lead after three minutes from a long-range shot just inside the centre circle from D Mahabir, hitting the top left of the goal.

Mid-way through the half Louis Jack brought the ball down from a corner and placed it in the bottom left of the goal to make it 2-0. Three minutes later Peter Evans fired the ball into the back of the net from the right hand side of the box in a well worked goal coming from the edge of the Rotherfield box.

Rotherfield’s scoring was concluded with a well-taken goal from man-of-the-match Sam Agg.