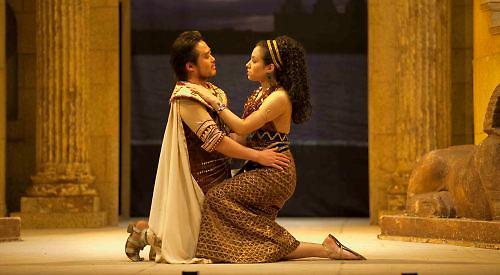 VERDI’S Aida at the Reading Hexagon on Sunday had all the familiar elements of an Ellen Kent touring opera production.

For one night only, this was entertainment on a grand scale with lavish set and extravagant costumes, featuring lesser known soloists and local students.

Considered one of the greatest pieces of music Verdi ever wrote, Aida includes the well-known arias “Celeste Aida”, “Ritorna Vincitor” and the classic “Triumphal March” used to support football teams around world.

Under the baton of musical director Nicolas Dohotaru, Sunday night’s performance was sung in the original Italian accompanied by the chamber orchestra from the National Opera and Ballet Theatre of Moldova.

The action takes place in Ancient Egypt at the time of a long war with neighbouring Ethiopia.

It is a story of love, jealousy and revenge centred on a love triangle with tragic consequences.

Radames, captain of the Egyptian Guard, loves the beautiful Ethiopian slave girl, Aida. However, he in turn is pursued by the Egyptian princess Amneris who, jealous of the lovers, uses her power to accuse Radames of treason. He is condemned to death and sentenced to live burial in a tomb.

Missing only was Houdini the black stallion — appearing at some venues only, but sadly not in Reading. Clever lighting design was used to convey the different scenes and moods.

Despite this feast for the eyes, it took me a while to warm to this performance.

The singing, which was at times lacking in control, improved and there were some good ensemble moments.

The acting, however, remained largely unconvincing and until the final scenes I felt little connection with the protagonists.

The dance sequences by the four young boys from Stagecoach animated the crowd scenes where the rest of the chorus remained largely motionless.

At the opening of act three the cast came alive and here we heard some wonderful dramatic singing — in particular from Iurie Gisca as the King of Ethiopia.

Immediately we felt his commanding presence on stage and engaged with his characterful and rich baritone sound.

Alyona Kistenyova as Aida was crystal clear throughout, blending well with Vitalii Liskovetskyi’s Radames in the heart-wrenching final scene as they die in each other’s arms.

We enjoyed some sensitive woodwind solos in the orchestra, particularly the flute and oboe.

The final words came from Zarui Vardanean’s Amneris, passionate and powerful, wailing for Radames’ soul and brilliantly conveying the anguish of a broken-hearted and jealous woman.

Ellen Kent’s opera next comes to the Hexagon in Spring 2018 with Puccini’s Madama Butterfly.

Shows also tour to the Wycombe Swan, the Anvil in Basingstoke and the New Victoria Theatre in Woking.