To Russia with bruv 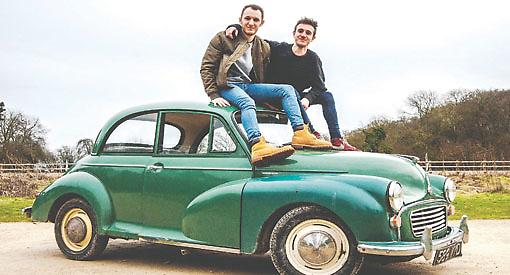 TWO brothers are to drive 10,000 miles across the world in a 1964 Morris Minor for charity.

Andrew and Russell Young are competing in this year’s Mongol Rally, a sponsored road trip that starts at Goodwood, near Chichester, and finishes in Ulan Ude in south-east Russia.

The pair, who live in Nuffield with their mother Annette, hope to raise at least £1,000 for the Muscular Dystrophy Campaign as 24-year-old Andrew, a freelance automotive photographer, suffers from a form of the disease.

The brothers, who registered for the rally in January, will set off on July 16 and Russell, 21, will leave his job as an estate agent at Davis Tate in Twyford to take part.

Entrants may only compete in a “farcically small vehicle” with a one-litre engine or smaller so the brothers bought a second-hand Morris Minor as Lord Nuffield, who founded Morris Motors, lived in their village.

They plan to drive between 185 and 310 miles a day in order to complete the challenge by the end of August. Everyone who takes part must cross the finish line by September 11.

After crossing the channel at Dover they will drive through France, Germany, Austria, Hungary, Serbia, Bulgaria, Turkey, Georgia and Azerbaijan, where they will take a ferry across the Caspian Sea then proceed through Turkmenistan, Uzbekistan, Tajikistan, Kyrgyzstan, Kazakhstan and Russia.

They will pass through Mongolia before crossing back into Russia to reach the finish.

The brothers, who will compete as “The Minor Miracle of Nuffield”, paid £1,000 for the car to a man who had owned it for several decades.

It has 97,000 miles on the clock but the chassis needs some repairs, which a friend will do for nothing.

The car, which has a top speed of about 50mph on level ground, will be fitted with a roof rack to carry the men’s camping equipment and some food and a modern radio which the brothers can connect to an iPod.

The headlights will be replaced with spotlights to help the men drive in the dark.

The vehicle will be decorated with sponsors’ logos and people are being offered the chance to name it in exchange for a donation. The brothers, who are classic car fanatics, will drive in shifts so Andrew doesn’t become too stressed.

He was born with hypokalemic periodic paralysis, which can leave him paralysed for several minutes.

Attacks can be triggered by factors such as excessive stress, strenuous exercise, getting too cold or eating meals containing too much sodium or too many carbohydrates.

He can still drive as he knows when an attack is coming on and can pull over.

Andrew said: “It all started at Christmas when we were having a few drinks, possibly too many, and discussing our hopes for the year ahead.

“Russell had said he’d quite like to travel and I said I wanted to do a road trip but had struggled to find anyone who was willing to do it with me. We kind of put two and two together.

“It was a bit of a joke to start with but we ended up putting our money down and making a serious commitment.

“Our Morris Minor wasn’t in the best state but that was a compromise to keep our budget down.

“It needs some structural welding, new sills and new suspension but it has its MOT and the engine seems to work okay. I’ve done about 100 miles in it — the engine’s pretty sweet and the gearbox is smooth, which is promising.

“I think there’s only so much preparation you can do, though. For the most part, we just plan to attack the challenge and see how it goes.

“In a weird way, you almost want to break down and find help in a little village in the middle of nowhere — it’s all part and parcel of the adventure.

“There isn’t an official route and although we have a rough idea of how we’ll tackle it, a lot will come down to how we feel on the day.

“It’s just about getting out there and having an adventure.”

Andrew said his condition was not a concern and he was looking forward to setting off.

He said: “My illness is not that bad when you consider that some people have to use wheelchairs and can’t walk or talk for long periods.

“I feel like I’m doing it for those who are more seriously affected — it’s very close to our hearts and we want to raise as much money as possible.

“I suspect that travelling in a car for long periods of time will have an impact but you have to give these things a try just for the fun of it.

“I imagine that spending two months in each other’s company will be a challenge in itself! There will be a lot of other difficulties like the language barrier, not knowing much about car maintenance and just the sheer distance we have to cover.

“We’ve built in a lot of contingency time because there are so many unpredictable elements like how well the car will perform.

“If I do get paralysed, it will be down to my brother to deal with it. We will have to stop and switch over or just rest for half an hour.

“It’s going to be interesting carrying all my pills around — there are a lot of border crossings involved and we’ll have to persuade the guards that we’re not drug dealers!

“We also have to strike a balance between carrying enough supplies without overloading the car as it’s not the most powerful.

“We’ll carry the basics like bottled water and tins of beans but we’ll have to get a lot of it en route because taking on too much weight will affect our top speed and miles per gallon.

“Most of our entertainment will come from navigating our way around and generally enjoying the experience but we’ll bring an iPod full of music for those tougher moments.

“Russell will probably hate me for saying this, but I think it’ll be full of flamboyant pop songs by people like Britney Spears. We’ll need something with a party mood to keep us going.

“Everyone has been extremely supportive of our plans. Our parents are somewhat worried, which is to be expected when we’re heading into the unknown where anything could happen, but generally I think people are a bit jealous.

“I’m feeling very excited and can’t wait to get going. Even going across Europe will be exciting but it will be even better once we head out further east.

“This really is a once-in-a-lifetime opportunity — it’s expensive but to do it with my brother in a classic car, which is something we both love, is a great privilege.”

Russell said: “The preparations are going well. It’s a long-winded process but everything’s now in the bag and we’re just counting down the days until we set off.

“I’m really looking forward to it — it won’t just be ‘travelling’ in the general sense but a real adventure.

“It’s going to be amazing to see so many countries and their people in a single trip so I can’t wait.

“It’s a risk leaving work to do this as I can’t guarantee there’ll be a job waiting when I return. However, I’d hate to look back a year from now and regret not giving it a go.”

To sponsor the brothers, visit www.theminormiracleofnuffield.com