A brief encounter with love and friendship beyond the footlights 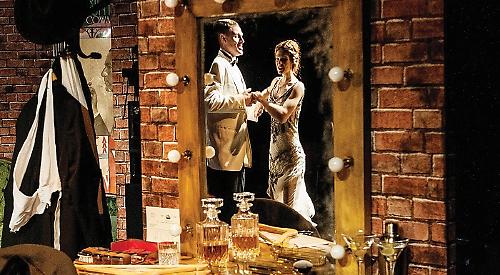 CLEVERLY wrapped up in the guise of a revue, Sheridan Morley’s entertaining piece took us on a journey through the highlights and some of the lowlights of a lifelong, loving friendship in the world of showbiz — that between the wonderful Noël Coward and Gertrude “Gertie” Lawrence.

We were treated to scenes, skits and song and dance routines from a diverse range of Noël’s works — from the torrid, clandestine tête-à-tête of Brief Encounter to the barbed comedy of Blithe Spirit and Don’t Put Your Daughter On The Stage, Mrs Worthington.

This jaunty production, with the combined talent of Ben Stock as Noël, Helen Power as Gertie and musical director Jonathan Lee on piano, was a glorious visit to a more glamorous bygone era.

Starring together as children in rep in Liverpool, Noël and Gertie were to form a bond which would hold steady through thick and thin and the vicissitudes of life, even when parted by their whirlwind careers jetsetting around the globe.

As they pushed each other’s buttons we saw the bickering and teasing inherent in any long-term relationship, so they resembled an old married couple, albeit always quietly nurturing each other’s talent.

Noël revealed that Gertie could be brittle, fickle and mercurial, impossible to read and emotionally unstable, but that this was all part of what formed her star quality.

Gertie, in turn, held Noël to his promise to write a play for her despite his writer’s block, and there was a great scene where this was resolved — she came to him as if in a dream and Private Lives was written overnight.

With jolly sea shanties, a melancholy Pierrot and more than the one cocktail hour, this production swept us through the lives of two people destined for their own versions of stardom — and the voices and musical talent of the cast brought this out with shine and polish and was a joy to watch.

The sharp suits, beautiful gowns and stage costumes were complemented by the Cowardesque dressing-gown-and-suit combo and, of course, a majestic centre-stage chaise longue.

It was enough to make you want to gently collapse on to said chaise longue in a dramatic fashion — and the audience was delighted.