Jukebox musical is ready to blast off 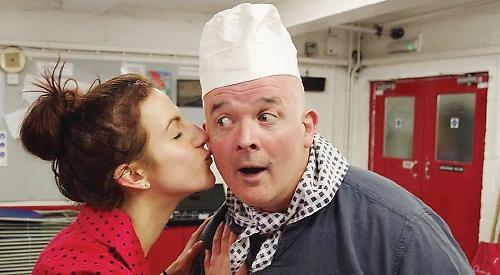 FASTEN your seat belts — Sinodun Players are about to blast off into the cosmos in hotshot jukebox musical, Bob Carlton’s Return to the Forbidden Planet, writes Carol Evans.

Loosely based on The Tempest and Fifties movie The Forbidden Planet, this powerful and thrilling spectacular is a heady mix of sci-fi and Shakespeare glued together by a backbone of rock’n’roll music.

The rollercoaster of Fifties and Sixties classics includes Great Balls of Fire, Born to be Wild, Shakin’ All Over, Good Vibrations, Monster Mash, Shake Rattle ‘n’ Roll, Yeah, Yeah, Teenager in Love — the list just goes on, with songs that have peppered our psyche for what seems like forever.

One of them, guitarist Colin Green, has enjoyed a long and illustrious career in the music business.

Starting out in Billy Fury’s backing group, he went on to play in influential Sixties R&B band Georgie Fame and the Blue Flames.

Since then, he has composed for film and TV and worked alongside a diverse range of artists — from Elton John, Diana Ross, Tom Jones and Shirley Bassey to Kiri te Kanawa, the Royal Philharmonic Orchestra and Bjork.

The songs mirror the show’s plot, which centres around fearless, steely-jawed Captain Tempest who, caught in a meteor storm, crash-lands his spaceship on Illyria, the Forbidden Planet.

He meets mysterious scientist Dr Prospero and his winsome teenage daughter Miranda. Both were marooned there15 years ago, due to the actions of the doctor’s scheming wife Gloria.

What follows is a tall tale of revenge, intrigue, love and a brain-enhancing X-factor drug. Throw a robot called Ariel and a tentacled monster into the mix and you have the ingredients for a fun sci-fi adventure of epic proportions.

She says: “It will be a joy of an evening, brimful of songs that everyone knows or can at least hum along to and it has a great script. It will be the best live music in town and I can guarantee everyone will go home singing.

“This will be the last live show before the Corn Exchange’s temporary closure for major work. Come and help us literally ‘raise the roof’.”

Tickets are priced £15 (or £12 for under-18s on Wednesday and Thursday evenings and the Saturday matinee), available from the Corn Exchange box office on (01491) 825000 or via www.cornexchange.org.uk