From malthouse to merengue to mezzanine 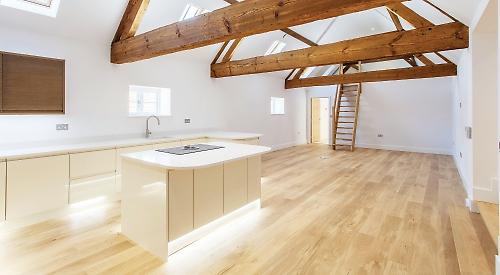 BACK in 2014, a draft of the joint neighbourhood plan — to create hundreds of new homes in Henley and Harpsden — included “recommending for redevelopment” the former Henley dance club Latinos, which closed in 2007.

Enter experienced property developer Paul Springett, who collaborated with the owners of the Hart Street site with a view to doing a little dance of their own.

But it wasn’t always a nightclub. Built in 1750 and extended twice through to 1765, this Hart Street building, now known as The Maltings, was once part of an 18th century malthouse, built to accommodate increased demand for malted barley for the London beer industry.

All this was made possible by the Thames transport system. (At the time, the river only had a few flash locks before the lock system was improved in the 1800s.)

Knowledgeable local historian Ruth Gibson is familiar with the site and has said of it: “The roof is of early 19th century kingpost construction, which must have replaced the earlier roofs — of which there must have been several of different periods.”

Malted barley was produced here all the way up to the 19th century when, as one of the principal malting houses, it was “able to wet 39 quarters a week” in the town, eventually being outshone by Brakspear, which brewed its own iconic product right here in Henley.

Ruth added: “The 19th century roof runs the whole length of the building and from the outside one can still see that the building consisted of several phases of building, apparently being extended several times as demand for malted barley grew.”

When rail and road transport took over from the river, and Henley saw more visitors, the site changed with the times, to be utilised by antiques dealers, carpentry and engineering enterprises (including at one point the manufacture of table tennis tables).

And all this before being taken on by Hart St Investments Ltd — a collaboration between Paul and the existing owners — with a view to making the building residential.

Once South Oxfordshire District Council granted permission to convert the Grade II listed building into flats and townhouses, work got under way.

Essentially, the site was a bare skeleton ripe for a complete rebuild/update. Having previously completed several listed building conversions in the town, Paul says he had a detailed specification for The Maltings project.

“We knew what we wanted to achieve, and the team — including architects Chris Tapp and Robert Rigby, Niki Schäfer Interior Design and a range of suppliers with their in-house design capabilities — provided just that.

“We had a succession of applications and worked closely with the local conservation officer on this project too.”

Permissions granted included one to raise the whole roof structure to the rear buildings to preserve the historic kingpost truss fabric.

“This was quite an exercise,” says Paul.

As Paul tells it, the nightclub section of the property — apartments one and two, plus the adjacent offices — was in reasonable, though dated, condition when he got involved.

He says: “The granaries behind the buildings had been severely dilapidated, although the owners had the foresight to repair the roof and put in some structural brick supports to the main timber beams some 40-50 years ago, so that the principal structure remained upright.

“Bearing in mind the building’s original purpose of malting barley so that it could survive the long travel time by barge to supply the London brewing industry, the main malting floors behind the nightclub building remained largely unseen and only had sporadic commercial use.

“Lying completely fallow for several decades, they had to be stripped back to the barest of structures then rebuilt to modern standards within that fabric.”

But don’t worry, the spirit of Latinos may well live on...

“Now the whole structure is so solid, you could still hold a dance in there!” laughs Paul.

Rightly so, Paul says he’s been amazed at what has been achieved in terms of retaining the lovely features of the original buildings in under two years of works.

“Discovering elements of the original structure resulted in a wonderful high specification conversion,” he adds.

Paul says of the mews-style development, conveniently tucked behind one of our town’s busiest streets: “We have created something architecturally interesting and luxurious that will stand the test of time — unlike Henley’s many previous nightclubs.”

Currently for sale are two flats — Apartment 1 and Apartment 2 — as well as 3 The Maltings, a three-storey townhouse.

Each of the properties have oak timber floors, alarm and video entry systems, and come with their own private car parking space (there is a car park at the back of the mews, which is in the process of being laid down).

Now, in place of the Latinos’ bar, is the luxurious high-spec kitchen of Apartment 1.

And in place of the dancefloor is the glorious open-plan living and kitchen space of Apartment 2.

Despite being clearly described as an “apartment”, No 1 looks more like a townhouse, having three floors and several outdoor balcony “gardens”.

This is without doubt Standard Property’s favourite choice as the design has been brilliantly realised, making the most of the high ceilings and beautiful exposed frame construction, including
built-in cupboards which reach right to the very top of the roof (a wall-mounted designer ladder on the opposite wall is your means of reaching those hard-to-get-to bits and pieces).

For this apartment, the crown jewel is without doubt the beautifully realised glass floor panel in the first floor which transfers light right down the centre of the building from the bespoke cylindrical glass skylight on the third floor.

“I was the one who came up with this idea,” says Paul delightedly.

The whole place is expertly laid out, so it’s very roomy indeed — with the most glorious contemporary kitchen (the Shayler Farmhouse cabinets and Bora hob are particular highlights).

In fact, the quality of the kitchen, with its integrated Siemens appliances and Cemstone worktops, are obvious clues to the fact that there is absolutely nothing average about this development.

You won’t be surprised to find underfloor heating, “whole house ventilation”, full insulation, and natty electronic keypad controls to open and close the Velux windows in all three properties either.

Sharing a mews entrance door with the first flat, Apartment 2 has more than a touch of the Tribeca loft about it and, like Apartment 1, this comes with a stunning kitchen as well as another of those sleek glass-panelled balconies, from where you can sip your glass of something cold on a hot summer’s night.

A pair of mezzanine ‘rooms’ at either end of the open-plan living/kitchen section adds handy extra space to this two-bed/two-bath construct, with the master bedroom suite lucky enough to have its own dressing room.

Probably best suited to downsizers looking for a dead-central lock-up-and-leave with parking, 3 The Maltings is stunning both on paper and in the flesh.

Here, you get everything you could ask for in a townhouse, but with a character charm and a quirkiness you’ll not be able to find in a new build.

Once again, glass floor/window lights are a clever touch which makes all the difference to what could have been just another boring conversion.

The open-plan luxe kitchen and living space has French doors which open inwards to reveal a teeny courtyard — the exemplification of that idiom “good things come in small packages”.

You’ll be able to sit out and enjoy your meals al fresco all summer long.

Paul adds: “Number 3 has a very adaptable layout and so central a location. All these properties are ideal for town centre living.

“I’ve been absolutely delighted with the result of them all — a unique harmony of historic elements and new up-to-the-minute levels of insulation, comfort, fittings and amenity.”