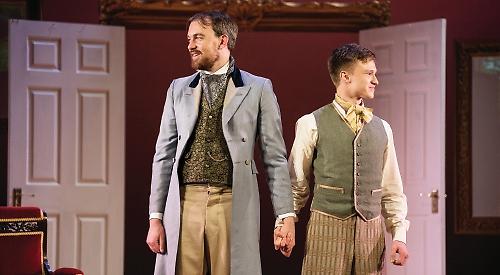 The Importance of Being Earnest | South Hill Park, Bracknell | Thursday, May 18

IT was a delight and a privilege to visit the Wilde Theatre at South Hill Park and enjoy this vibrant, uplifting and hilarious production of The Importance of Being Earnest — the play with which the theatre opened in 1984.

There was an extra air of anticipation as we awaited the arrival of Lady Bracknell and an anecdote about a very important handbag.

Kicking off with a very brief but jazzy cacophony, where the servants are having a rave, the immediate calm and serene aftermath somehow enabled us to step back into the Victorian era.

Subtitled “A Trivial Comedy for Serious People” and written in a time riddled with the constrictions of class and the obligations of society, Oscar Wilde succinctly and beautifully satirised the flaws in this demanding set-up.

He introduced among other things the concept of “Bunburying” — the convenient get-out clause of tending to a sickly (but fabricated) relative, and that of having an elder brother (just as fabricated) who is something of a cad.

His acute observations on hierarchy, etiquette and the universal themes of human wants and desires were teased out of the script and served to us on delicate platters for our enjoyment.

Everyone in this tight collaboration was fabulous — with director Alastair Whatley also taking his place on stage as a top-notch word-perfect Jack.

The scenes of simmering tension between Jack and Algernon and between Gwendolen and Cecily were a scream.

With both girls exchanging guarded pleasantries until discovering that it would appear they are both to marry Ernest, a farcical and terse tea party ensues with subtle and not-so-subtle insults, matched in tone by a muffin fight between Jack and Algernon.

The girls’ love of the name Ernest and the honesty it symbolises makes the boys’ misadventures and tall tales even funnier.

Enter staunch social climber Lady Bracknell (played with aplomb by Gwen Taylor), whose interrogation of Jack over his origins holds a mirror up to the class hierarchy of the day.

The moving side story of Reverend Chasuble and Miss Prism was daintily played out and the whole piece had a great feelgood factor.

This was very satisfying to watch and a great tribute to the words and witticisms of Oscar Wilde.

Sadly his other local tie-ins were not to be so harmonious, as his incarceration led to him writing The Ballad of Reading Gaol, and there was a moving epilogue including, among other things, the immortal line, “We are all in the gutter, but some of us are looking at the stars.”

But here in South Hill Park the starriness was there for all to see.