Latter and Butler make runs after Hurley fail to hang on 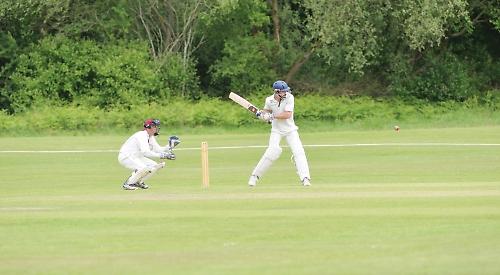 A POOR batting performance by HURLEY led to a crushing friendly defeat at NETTLEBED on Sunday.

The hosts opted to bat first in this 40-over contest but suffered an early setback, losing Edwards for one and Vines for four, to Henry Graham.

Runs were easier to come by at the other end as Alex Williams struggled to find a consistent length despite bowling some very good deliveries.

Phil Latter, who hit 56, and Sam Butler, with 29, steadied the ship with a 58-run partnership for the third wicket. Both batsmen were given second chances, with Latter dropped by James Calliss and Butler escaping as Mo Basharat failed to hang on to a difficult chance.

Phil Ridgeway replaced Graham and broke the partnership as Butler skied to mid-wicket where Calliss made up for his earlier mistake.

By the half-way drinks break Nettlebed had progressed to 106-3 with Vockins and Latter going well. But the first ball after the interval saw Latter heave across the line to Ridgeway and lose his middle stump in the process.

Matthew Williams accounted for Buxton, caught at cover by the bowler’s brother Alex, while Vockins continued to smash the ball to all parts of the ground. Dave Walton was unable to contain him, conceding 50 runs from his four overs.

With a huge total mounting, Joe Graham replaced Williams and the change saw the last four wickets fall in 16 deliveries.

Graham kept a cool head to run out Mike Butler who set off for a suicidal single. Joe Graham then picked up the last three wickets, bowling Russell for a duck, Jack Latter for one run and had Vockins stumped for 112 as the hosts finished on 245 all out in the 39th over.

The Hurley reply couldn’t have got off to a worse start, losing both openers before a run had been scored.

The only partnership of any note was between Henry Graham, with 16 runs, and Phil Ridgeway, who added 26, putting on 35 for the third wicket.

Graham was then adjudged leg before to Sam Butler and Ridgeway skied back to the same bowler, removing any feint hopes Hurley may have had of chasing down the total.

Joe Graham was the only other batman to reach double figures as a series of rash shots and some good bowling saw the visitors shot out for 74 inside 19 overs.