Memories of Moore, the friendly actor 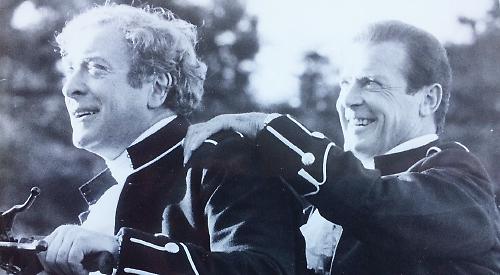 THE sad death of Roger Moore last week reminded former Henley Standard reporter Lesley Dibley of when she caught up with the actor.

It was back in 1989 and he was in Sonning filming for Bullseye!, which also starred Michael Caine and was directed by Michael Winner. It was released the following year.

Lesley, who now works for the Craven Herald in North Yorkshire, says: “Part of it was filmed at Sonning, where Michael Winner closed the road, and caused much chaos. This picture was taken of the pair on a static motorbike that was stuck at a sharp angle as they were supposed to be leaping over something.

“The stunt itself was carried out by the stunt rider Eddie Kidd, who was also on set — all of them were dressed in kilts for some reason.

“I had great access to the set, as I’d made friends with a security guard, who just let me wander round.”

The presence of a reporter didn’t make even the famous James Bond actor raise an eyebrow.

Lesley says: “I went up to Caine and Moore, who were sitting enjoying cigars, and asked if I could take a quick
picture.

“Caine was quite grumpy but Moore was very friendly. As I recall, Jenny Agutter was also there.”