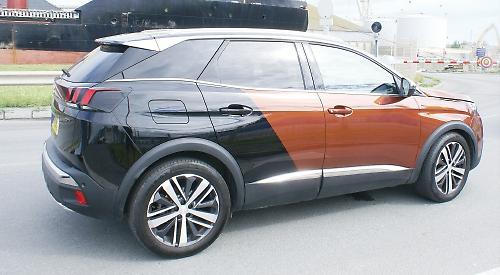 THEY were the words that any motorist travelling abroad — let alone a motoring journalist — might dread: “What’s under the bonnet, sir?”

But the man at British customs in Portsmouth Harbour was insistent. So I searched for the bonnet catch release.

Of course in theory I knew very well what was under the bonnet of this week’s drive — the all-new Peugeot 3008 SUV (sport utility vehicle) — as we set off for France.

There is also up-to-the-minute cabin technology including i-Cockpit digital instrumentation and good economy to boot.

The test car was also turned out in my new favourite livery — coupe franche in gold and black — that is, what we Brits might call a two-tone paint job.

For the moment, we were faced with a polite but determined customs officer at the Brittany Ferries terminal who insisted on looking under the Peugeot’s bonnet.

Now the glory of this job is that in any one year I get to drive a lot of cars. But my first concern is not always, I confess, to check the whereabouts of the bonnet catch release.

Our otherwise friendly customs officer was showing a frisson of impatience as I consulted the 3008’s handbook.

Finally, I was able to release the bonnet, step out of the car and answer a series of standard questions from the mollified customs officer.

No problem as far as I was concerned — in view of the all too real terrorist threat to the UK mainland, heightened security checks are plain common sense. By

contrast and proof positive that there does not appear to be any Brexit fallout so far, a cheery-faced gendarme on the other side of the channel at St Malo greeted us with the warmest of welcomes.

“Bon voiture, monsieur!” he said, admiring the rather striking looking vehicle before him.

This was no doubt because I was at the wheel of a pristine French-made car produced by the country’s still thriving industry — a fact of which Frenchmen are justifiably proud.

We were appreciative, too, of the fact that our overnight crossing from Portsmouth to St Malo on Brittany Ferries’ Bretagne, was quiet. Travelling in May has its advantages.

I can thoroughly recommend for motorists who want a civilised crossing, this mode of travel, which sets you up for any drive through France.

We arrived at Portsmouth on a beautiful Sunday evening in good time for the 8.15pm ferry.

The cars were loaded efficiently and without fuss. We were settled in our cabin in good time before departure.

Then it was up on deck to say goodbye to Britain for a short break. The ensuing sunset across the Solent was breathtaking — we felt lucky and the good weather prevailed throughout our stay.

Brittany Ferries has upped its game enormously in recent years. The cabin was comfortable and clean, as were the bars and cafés on board.

For those that wanted it, there was also fine dining available. The Bretagne’s main à la carte restaurant, Les Abers, is tempting for an evening meal before turning in.

Elsewhere on board there is La Baule, a self-service restaurant and an excellent café, La Gerbe de Locronan. For families, there is a children’s soft play area in this section. For those who want their first holiday taste of French wines there is the main lounge bar, Gwenn Ha Du.

Elsewhere on the boat there was one of my old favourites for Sunday evening relaxation — the Piano Bar, complete with live music played on a grand piano.

I, like many other British motorists who love holidays on the continent, have over the years crossed the channel by various means, be it tunnel or ferry.

For any motorist contemplating a drive of many or a few kilometres ahead on the other side, I have found this particular overnight crossing from Portsmouth to St Malo a great way to start any motoring holiday. Certainly the all-new Peugeot 3008 SUV has made an impact on French soil as well as in the UK.

It was greeted with great enthusiasm when it was named 2017’s Car of the Year at the Geneva Motor Show by a judging panel comprising 58 European motoring journalists. Elsewhere, it has also picked up the 2017 Carbuyer Car of the Year award.

You can see why. Somehow Peugeot sticks its neck out to stay ahead of the game. Some car makers do not and must face the consequences.

The demand for top-notch technology in cars is huge now and will only get more acute in an industry that thrives on competition.

The overall level of comfort, performance and technology in the 3008 is extraordinary for what is ostensibly a family car (more on which next week).

It’s good to see this level of comfort and performance is no longer the sole prerogative of luxury brands.

In a second part to our recent sojourn to France, I will explore what some of the many thousands of motorists who travel there this summer might expect from a motoring holiday in France.

Car plus two passengers from £198 return for eight days away

Travel between June 17 and July 25 on the following routes: