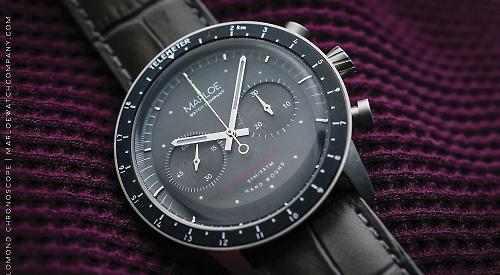 A WATCH manufacturer is hoping to expand after moving to Lower Shiplake.

The pair, who met via an online watch forum, launched the business with the help of Kickstarter, a crowdfunding platform.

It was based at Mr Goffe’s then home in Bourne End before moving to a business park in High Wycombe.

Now, after rapid growth in sales, it has moved to new premises in Bolney Road on the Culden Faw Estate, which belongs to Swiss billionaire financier Urs Schwarzenbach.

The business idea came years later after he bought a $200 quartz watch in America while visiting his brother.

Mr Goffe said: “A couple of years later the battery died so I thought I’d replace it myself. I took the back off the watch and it was just a hollow piece of metal with a horrible little plastic movement inside.

“I was a little bit naive to think there was more in there, like cogs.  I thought I could do something more honest — something of a similar price but with which you were getting so much more for your money.

“If you hold one of our watches up to your ear you hear the whirring of the mechanical parts.”

It was while living in Sweden between 2013 and 2016 that he started looking into the possibility of making a watch.

“Slowly but surely I built up my knowledge, said Mr Goffe.

“I pitched my ideas to Gordon, saying that I wanted to start a very traditional watch brand with hand-wound watches and our relationship grew from there. On my return to the UK we didn’t have the money to fund the project ourselves so we used our own money to make a prototype and do the promotion. I think we sold 1,000 watches on Kickstarter and that allowed us to expand.”

The company made a small profit in its first year which was reinvested in the business.

Mr Fraser, 31, is the company’s product designer and works remotely from his home in Fife.

The company makes three different watches with watch heads made in the Far East and straps in Germany which are assembled in Shiplake and put through quality control.

The Marloe watches cost between £250 and £450 each and the business sells up to 50 a month. Mr Goffe said: “We have tended to describe them as a contemporary take on a traditional, classic watch.” The company’s new base has offices, storage space and a small assembly line that will allow it to expand.

Mr Goffe said: “There were several reasons for the move to Shiplake. The biggest and my wife Melissa and I moved to Henley so we wanted an office close to home.

“We also wanted a place that would reflect the brand so we didn’t want to be on a big industrial estate. We wanted somewhere rural and quiet where clients could come and look at our watches.

“We want to look like a professional business and you can’t do that from a small room in High Wycombe.

“What the move has allowed us to do is to grow the business. It’s going really well for us and we’re now looking at making a Swiss watch.

“In a year or two from now we have plans to start assembling almost the entire watch head in the UK.

“We’re a local company that is trying to grow and hopefully, as we do, we will employ local people.”

His wife wears a special watch she designed herself and is based on a sundial she saw in the Lake District. She made a sketch of it from which Mr Fraser made the watch.