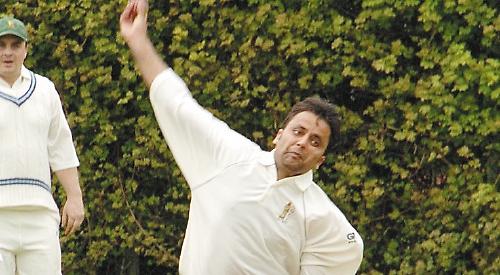 GREYS GREEN had to settle for a share of the spoils in their home clash with THE REFRESHERS.

Batting first the visitors quickly found themselves three wickets down, before Anu Mohinder and Saunders consolidated their position with a century stand, at which point Saunders departed after a steepling catch held by Rooke, adding to his two wickets early on.

Although Shafqat kept things quiet at one end, Mohinder took charge of the innings, mixing good technique with powerful strokeplay, as he completed a century just before tea to leave his side on 201-7.

Mohinder’s prowess had disguised the fact that batting was not easy on a wicket where the ball gripped the surface and Greys Green found scoring difficult throughout their innings and, as with their opponents, were themselves heavily reliant on one batsman, Shafqat, who batted for all but five overs, holding the innings together with a half-century from the final ball.

Mohinder exerted his influence once more, taking two quick wickets towards the end but even he found it impossible to force a result as the hosts ended on 121-6.