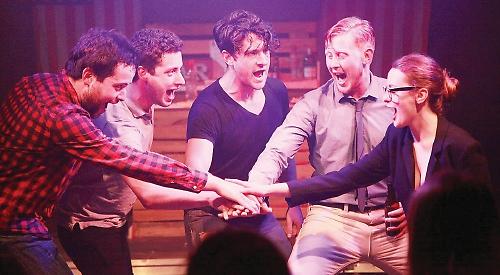 WRITTEN by two young Americans, Kyle Ewalt and Michael Ian Walker, Bromance is a musical that had never previously been staged in full.

The songs, however, had been performed as a concert, and these found their way on to YouTube, where they came up in a search by Daisy Smith of How Very Productions.

She had been thinking of putting on a charity concert in Henley, but instead saw an opportunity to bring this very funny and cleverly written show to the town — with a little help from her friends.

Walking into the HAODS Studio in New Street, I was really impressed by how it had been transformed into a Chicago sports bar.

The seats were all placed around round tables and you felt like you were part of the scenery — as indeed you were in some of the scenes.

I was pleasantly surprised at the intimacy of the room. The lighting by Kim Hollamby was just right, the staging was perfect and the band were playing in the corner, which also seemed very fitting and apt for this production.

The show started full of energy with four very talented guys — Robbie Smith as Dick, David Zachary as Harry, Glen Newham as Tom and Liam Ross-Mills as Marty — enjoying a St Patrick’s night out on the town.

Straight away you got to feel how important male bonding was, over a few beers, and how bringing a new “bro” into the fold was a test that only the toughest would survive.

Having only just moved to Chicago, Marty was the new guy coming into the male fold and he had to prove he could withstand the “brodom” test.

Dick and Marty ended up bonding quickly, but Harry and Tom found themselves feeling jealous.

The journey that they all took was brilliantly funny and all four guys were perfectly cast in their roles.

The show was full of great one-liners, great music, and strong acting.

You couldn’t fault any of the actors — including the “She-Bro”, Rebecca Hazel, who had a huge amount of girl characters to keep chopping and changing into throughout.

Each and every one on stage deserved to be there and it was great watching this production come to life.

If you are a Point Break fan, you will love this show. There are nods to the movie throughout and one of the scenes re-enacts Dick’s favourite moment from the movie — the skydiving scene!

One fellow audience member I spoke to after the show, who had been watching with his friends, said: “I loved it — an awful lot rings very true!”

I also got to speak to the stars of the show and the general feeling was how much they have enjoyed working on this production. They all enjoyed the challenge of bringing Bromance to life.

From the direction to the lighting to the sound and of course the acting, this was a very well put together show and I wish the cast and crew the very best of luck as they discover new possibilities with Michael and Kyle’s excellent writing.

Well done, Daisy — a great production. Thanks for bringing it to Henley.