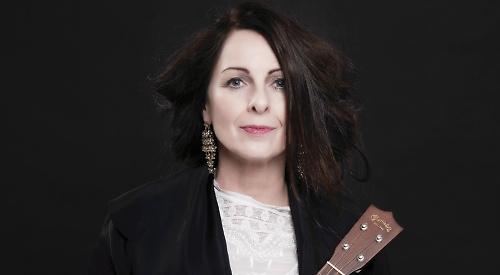 ONE of George Harrison’s former backing vocalists will be renewing her links with the late Beatle’s music tonight (Friday) when she takes to the stage at the Kenton Theatre.

Sam Brown will be performing with the 10-piece All Things Must Pass Orchestra, led by Alex Eberhard, who are returning to the New Street venue for the third successive year.

A spokesman for the Kenton Theatre said: “We’re thrilled to welcome back the All Things Must Pass Orchestra. The band dedicates itself entirely to the Quiet Beatle’s work.

“George Harrison not only wrote some of the Beatles’ most beautiful songs but also continued to write great music during his solo career, recording 12 studio albums.”

The last of these albums, Brainwashed, was released posthumously in 2002 — almost a year on from Harrison’s death from cancer aged 58 — and was the album to which Sam contributed backing vocals.

In the last year of his life, the former Beatle also oversaw the reissue of a special remastered edition of his 1970 triple album All Things Must Pass — a project on which Sam also worked.

She said: “George did a sort of remix and re-recording of My Sweet Lord for the remastered version of the album. It’s an extra track and he just got me to re-sing all the backing vocals on it, which was great.”

Having lost her singing voice almost 10 years ago due to ongoing complications with her vocal cords — “the muscles that you use to sing are destabilised” — Sam won’t be contributing on that front tonight.

She has since forged a new musical career teaching people to play the ukulele — most notably as the founder of the International Ukulele Club of Sonning Common — and it is this instrument that she will be bringing to the party.

A rather special one at that, as the ukulele she will be playing was originally given to her father, Joe Brown, by Harrison in the late Nineties.

Sam says she first took up the instrument in 2000, when she began writing songs on it. With that in mind, are there any of Harrison’s compositions that she thinks lend themselves particularly well to ukulele?

“Oh yeah, definitely — lots of them. Between the Devil and the Deep Blue Sea, because that’s a cover that George did, which is really good. Any Road Will Take You There, that’s great. In fact, most of his songs are good for ukulele, to be honest with you. Even Beatles songs like If I Needed Someone, things like that. So yes, there’s quite a lot!”