Landmark musical holds nothing back 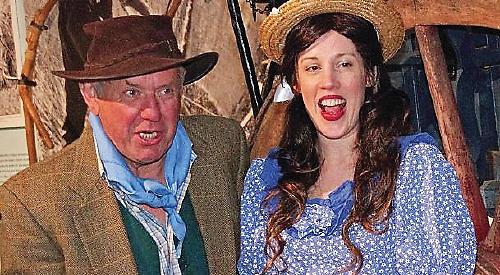 RODGERS and Hammerstein’s Oklahoma! took Broadway by storm in March of 1943 — going on to enjoy an as then unrivalled 2,212 performances.

Its catchy tunes, scaled-up staged numbers and slick choreography cemented its place in the annals of musical theatre history and, to this day, remains a perennial favourite for professional, amateur and touring production companies alike.

But perhaps less recognised is the show’s contribution to the art form of the “book musical”.

Oklahoma! was groundbreaking — for the first time, here was a musical play which, while complemented by a customary string of song and dance numbers, now included pathos, emotion and dramatic intention.

It’s not an entirely fair playing field for a reviewer to show up on dress rehearsal night, as it is not possible to gauge the reaction of an audience, but technically this production by the Woodley Light Operatic Society ploughed on without a hitch.

Moreover, the entire cast held nothing back in this almost bare auditorium. Impressive credentials for an amateur club.

For those who haven’t seen either a stage production or the 1955 film, the scene is set in the Oklahoma Territory of 1906, and the plot tracks the progress of two romances — one between cowboy Curly McLain and farm girl Laurey Williams, and the second between Will Parker and his flirtatious girlfriend Ado Annie.

Both Matt Adamson and Melissa Heaps as Curly and Laurey respectively deliver strong lead performances with competent vocal ranges, and the two develop a chemistry which is most notably consolidated in the act two reprise of the memorable number People Will Say We’re in Love. Samantha Fields manages to hit all the physical and cerebral comic notes as Ado Annie, and produces a genuinely funny rendition of I Cain’t Say No.

Furthermore, she has poise and is clearly connected to the material — it’s not the easiest feat making the words of a musical comedy live and breathe.

Ray Higgs as Jud Fry offers up the most impressive vocal performance of the night with Lonely Room — perhaps the darkest moment of the piece. His inner torment is credible, and the show takes on a new dimension at this juncture.

Act two kicks off with a generally more confident ensemble performance, and at points the chorus was thunderous — particularly in The Farmer and the Cowman and the title song finale.

Both director Laura-Anne Putterford and Claire Martin took on choreography duties, and there are effective dance sequences during the ambitious dream sequence. Heaps’s ballet skills are clearly shown off here too.

Putterford has contrived a colourful production with impressive costumes and a nifty modular set. She also has a canny sense of dramatic pacing and physical staging. Derek Holland’s small band do a sterling job of tirelessly belting out the glorious songs from the pit.

While some actors found it difficult to make themselves heard (often struggling with the southern accents), others were hanging a little too long on cues.

But one thing’s for sure — you will come out of the auditorium whistling the tunes.