Have you seen my Bottom? 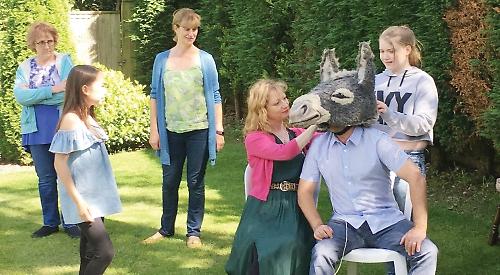 FINAL rehearsals are under way for a summer Shakespeare production that has been more than six months in the making.

On Tuesday (June 20) the Garden Players will take to the stage in the grounds of Stubbings House near Burchetts Green with their open-air version of A Midsummer Night’s Dream.

One of Shakespeare’s most popular comedies, the play runs for five nights at the Henley Road venue until Saturday, June 24.

Tickets are selling fast, with Garden Players chairman Steve McAdam confirming that the Saturday evening performance had sold out — and Friday not far behind.

He said: “We are excited to be returning to perform once again on the superb lawns of Stubbings House — a truly stunning venue which will be open for picnics from 5.30pm. Our audiences will be in the covered stand with raised seating which proved so successful in improving comfort and visibility for The Merchant of Venice in 2014 and Henry IV Part I in 2015.”

All five performances start at 7.30pm, and with the production being staged during midsummer week the organisers are hoping for weather to match.

Calling the play “a magical tale of enchantment that ranks among Shakespeare’s finest”, a Garden Players spokesman added: “If you go down to the woods tonight, what big surprises will await you?

“Mischievous fairies and star-crossed lovers, comic labourers, an ass-headed monster and a hungry lion all play their part in ensuring that the course of true love never does run smooth.”

While the Garden Players hail from Maidenhead, two of the stars of the show will be familiar to Henley theatregoers.

Grainne and Tim Harling, both of the Henley Players, are playing Titania and Oberon respectively.

Public auditions for the show were held in January at Hurley village hall and St Dunstan’s church hall in Bourne End.

Both venues were subsequently used for indoor rehearsals, together with St Paul’s School in Wooburn Green and St Teresa’s Catholic Church in Beaconsfield.

Once the weather allowed, Storrington Garden in Beaconsfield was used for outdoor rehearsals. These started in May and have continued this month — but now the cast are ready for the real thing.

Mr McAdam, who is playing Theseus, Duke of Athens, said: “We move into Stubbings this Friday/
Saturday and our first rehearsal will be on Sunday afternoon. The full dress rehearsal at Stubbings will be on Monday night.

“The last time we did this play, I played Oberon, king of the fairies. They are both reasonably sizeable parts which are sometimes combined if theatre groups are short of actors. We are fortunate to have quite a large pool to draw from.”

He added: “We are delighted to perform once again on the superb lawns of Stubbings House and we are, as ever, extremely grateful to Stubbings’ owners Mr and Mrs Dudley Good for inviting us to do so, and to Oliver Good for working closely with us in so many ways.”

Proceeds from this year’s production will go to the charity Child Bereavement UK, with previous Garden Players shows having raised £78,000 for a range of charities in the eight years since the company launched in 2009.

Tickets are priced £18, with concessions at £15 available for the Tuesday and Thursday performances. For more information and to book, visit www.stubbingsestate.com