Fifties thriller gets repertory festival off to a great start 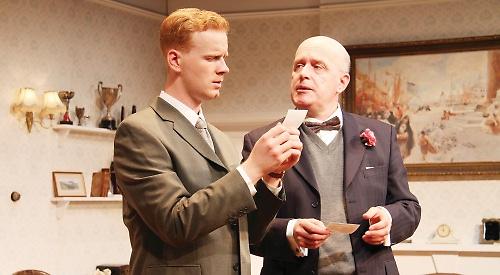 KICKING off the Windsor Repertory Festival in style, this classic thriller from Frederick Knott was a glimpse into a marriage gone awry and a recipe for the perfect murder.

Former tennis professional Tony Wendice has known for some time that his wife Sheila has had an affair with author Max Halliday, having found their love letters.

However, he married for money, and in his avarice sees an unconventional way out.

As he hatches a convoluted plan and deems it foolproof, he blackmails an old school acquaintance into doing the dirty work.

However, as crime writer Max points out, no one can tell with 100 per cent certainty how any sequence of events may untangle.

In keeping with the Fifties setting, this production had old-fashioned telephones, fixtures and fittings alongside raincoats, attaché cases, and drinks tables, plus the emotive backdrop of the death penalty.

With a Grace Kelly-like demeanour, Sarah Dungworth was a study in both calm and vulnerability as Sheila, while Stanley Eldridge as the arrogant, confident Tony was wholly believable.

Liam Nooney brought a nice touch with his Fifties attire and aloof attitude, while Mark Jardine was intense and passionate as Max and Jonathan Rigby spot on as Inspector Hubbard.

This play built up the tension and had I been watching it at home I would have shouted at the television several times.

As Tony enjoyed playing the gadfly and Max turned fortunes around, the suspense kept going right to the end.

As we were informed after the play, the Windsor Repertory Festival comprises three shows in three weeks from one company, with all the acting, props, scenery and sound a collaborative effort, ready to be quickly turned around between each run, paddling furiously behind the scenes for a rapid success — a bit like the swans on the Thames. Bravo!