Warmth and humour add light and shade to emotional climate 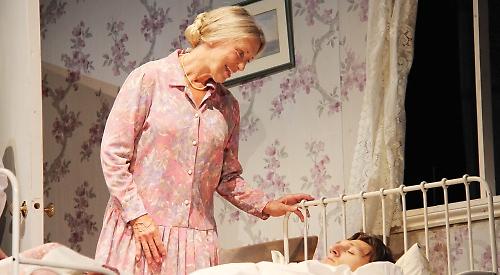 AFTER a murder mystery and mayhem on the moors, the Windsor Repertory Festival was rounded off with a bittersweet tale of love and longing, peppered with warmth and humour.

Ladies in Lavender takes us back to a time where the repercussions of the First World War on the generations are hitting home and the Second World War is looming on the horizon.

Sisters Janet and Ursula Widdington are in their autumn years, although Ursula is determined to maintain her philosophy of living life in a perpetual summer.

Their world is turned upside down when a mysterious young man washes up on the beach in a storm (recreated here with great special effects).

The mystery deepens when the man, Andrea, turns out to be Polish and fluent in German, something which raises the hackles of local doctor and amateur violinist Dr Mead.

Curious housekeeper Dorcas and visitor Olga Danilof round off this ensemble of archetypes affectionately carved out of the Cornish coastline by Charles Dance and shaped by Shaun McKenna.

As the sisters nurse Andrea back to health, it becomes apparent that he is a talented musician, much to the chagrin of Dr Mead.

Dorcas finds much amusement and merriment in the ladies’ fussing over Andrea and is a great conduit for their maelstrom of emotions.

With Janet trying not to reflect on her lost wartime love, Ursula blossoms as she attends to Andrea, reading The Little Mermaid and teaching him English.

The arrival of feisty Olga and the attentions of imperious Dr Mead set off a series of jealousies and nothing is the same after.

The contemporary set and costumes worked a treat, with a house, garden and beach all multi-tasking and creating different zones.

Lighting played a part and scenes where the violin was played were pretty effective.

Ursula’s relentless optimism, Janet’s wistfulness and Dorcas’s observations, along with her pasties and scones, created scenes of domesticity interrupted by dreams.

As Andrea treats his carers with nothing but respect, kindness and affection, the healing power of music shines through in this moving and heartwarming tale.