Singing couple fall for each other over love of outdoors 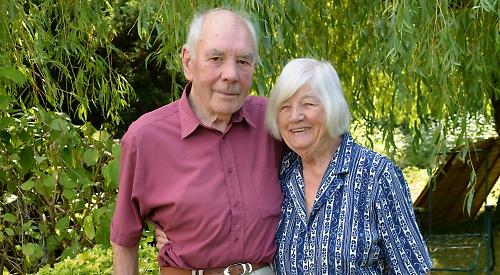 A COUPLE from Sonning Common with a combined age of 173 were married on Saturday.

Bernard Winnington, 92, and Barbara Butler, 81, tied the knot at All Saints’ Church in Peppard in a service conducted by Rev James Stickings.

After the service the couple rode on a trailer pulled by a 1962 McCormick International B414 tractor, restored by the groom, to their reception.

About 80 people attended to celebrate the nuptials at Peppard War Memorial Hall, in Gallowstree Road.

Mrs Winnington, of Wood Lane, said: “We have bowled over by just how lovely people have been about it. It’s all been quite overwhelming. I’ve lived in the village for 49 years and everyone I speak to seems to be so happy about it.

“There are so many unhappy things in the world so people are pleased to hear about something happy.”

The couple had known each other for a number of years as they both sang in community singing group Nottakwire.

They became closer when Mr Winnington, who grew up on a farm in Warwickshire, read a profile of his now wife, then Ms Butler, in the Fish volunteer centre’s newsletter in spring 2015.

In the piece, written by Clive Mills, of Shiplake Bottom, it told of Mrs Winnington’s life growing up on Hilliers Farm, in Hampshire. “I’ve been connected with the charity for 28 years and in the article it made reference to the farm,” she said. “Bernard phoned me up and said he knew the farm.

“He offered to take me down there but I thought ‘I’m not going down there unless I have some sort of chaperone because I do not know him’!”

The couple bonded over their mutual love of the countryside, as both their fathers were farmers and did eventually go and visit the family farm.

Later in 2015 Mr Winnington, who lives in Grove Road, offered to make Mrs Winnington some raised garden beds to help her grow her own vegetables.

“It was a simple job,” he said. “It took me three or four days working in Barbara’s garage. She brought me out some Cup-a-Soups to keep warm and eventually she invited me in.

“There was a clear feeling of empathy between us and it was lovely. I had lost my wife and was on my own. At our age you can spend a lot of your life without company. You’re trying to make the most of life but you’re basically waiting for God.”

Mr Winnington, a retired agricultural engineer and business owner, moved to the village 24 years ago.

This was so his family could help care for his first wife Madeleine who suffered with tachycardia, which causes the heart to beat extremely quickly. She passed away in 2011. “I moved here so family could help us look after her,” he said. “Since my wife’s death I have busied myself rebuilding vintage tractors.

“I have done five and they have always been International Harvester.”  His restorations have been awarded at the Woodcote Rally.

Mrs Winnington worked as a nurse during her career but she was medically retired after breaking both legs when walking in the Pyrenees in 1994.

She moved to the village with her first husband Gerald, who was 17 years her senior, in the Sixties. She was widowed in 1978 when he died after suffering a brain tumour.

The newlyweds, who have  seven grandchildren between them, also both enjoy horticulture and Mr Winnington was a long time committee member of the Chiltern Edge Horticultural Society.

Mrs Winnington said: “In the autumn of last year we went to Gardeners’ World Question Time live at the Falkland Islands Memorial Chapel at Pangbourne College. It was nearby so I thought Bernard would like to go because he loves horticulture.

“I’ve always wanted to to go to the nativity play at Aldermaston, which is run by a local family in the church and it’s done in total darkness.  We went together and it was magical. I thought ‘I’m rather fond of this chap’.”

Mr Winnington proposed to his wife in February and the couple picked a ring out a few days later. Not long after it was announced to other members of Nottakwire, where Mrs Winnington sings alto and her husband tenor.

“It’s a very friendly group and it has helped build lots of friendships,” Mrs Winnington said. “Between us we’ve received more than 100 cards of congratulations.

“I’ve been in the village a long time but there is a real depth of feeling. People have been so pleased for us it’s just overwhelming.”

On Saturday Mrs Winnington wore a royal blue satin dress and was given away by her son William Butler, from Bradford-on-Avon.

Mrs Winnington intends to sell her home after the couple’s honeymoon in Dartmouth and the Isle of Wight and they will live at Mr Winnington’s home.

Mr Winnington said the couple were looking forward to their life together. He said: “It’s not the years of your life that matter, it’s the life you live in those years. Don’t just talk about doing it, get on with it!”

Mrs Winnington added: “There is so much which is beautiful in the world and just because you’re old doesn’t mean to say you don’t feel emotions. You can still go out and enjoy yourself and do all the things you want to.”