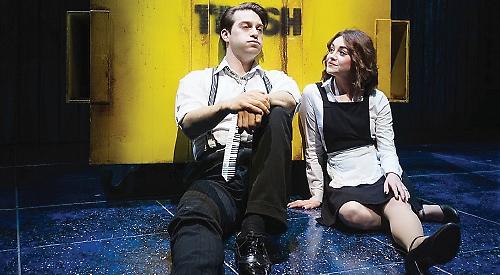 THE Wedding Singer is a template musical to a certain extent — you can pretty much work out how it will end after about 20 minutes.

But it is a fun show with lots of laughs and, with this company, a good deal of talent.

Cassie Compton, for example, is truly special in the part of Julia.

Her vocals were extraordinary. Her love song to her true love, who is hidden within a dumpster, was perhaps a metaphor for life — when you’re down and out, get up and get on with it.

But she made a song with the unlikely title of Come Out of the Dumpster into a truly romantic moment, which is no mean feat.

Lucie Jones, fresh from pulling off a surprising and impressive 111 points for the UK at Eurovision, has a set of pipes to die for.

Sadly, some of her incredible singing was drowned out by the band — sound levels were a bit of a continual issue throughout the piece and my only real criticism.

Jon Robyns played Robbie the wedding singer himself, and was fun and likeable.

He essentially played two parts and his tone changed to match the part of the singer and then the more real character of the love-torn troubled musician.

Ray Quinn played Glenn Gulia and was the perfect balance of creep without losing a certain cheeky charm.

You could understand why someone might fall for him, while at the same time hoping they escape before it is too late.

His name also allows for a classic moment of daft comedic clarity from Julia, when she realises her married name will be Julia Gulia.

Ruth Madoc, of Hi-de-Hi! fame, was hilarious as Rosie. Her impressive gymnastic and rap skills were surprising and, alongside a delightfully camp Samuel Holmes as George, got the biggest cheer of the night.

In a nutshell, this was a high energy night out, with lots of expected, unexpected twists.

It’s not for the diehard theatrical aficionado, but it was a fun night out and the cast were top notch.

The Wedding Singer is touring the UK. For tour dates and tickets, visit www.
theweddingsingermusical.
co.uk/tour-dates