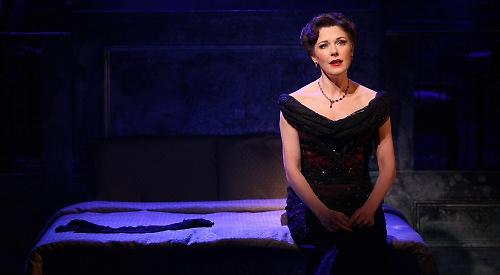 THE big summer musical at the Watermill Theatre in Bagnor is a must on any keen theatregoer’s calendar.

The theatre set the bar extremely high with a fabulous production of Hot Mikado a few years ago, but this summer’s choice — Stephen Sondheim’s A Little Night Music, directed by Paul Foster — comes pretty close to hitting that target.

Sondheim’s music is complex and sophisticated, but the actor-musicians in the large cast, undeterred, made a superb job of Sarah Travis’s accomplished arrangements.

Rarely offstage, they move seamlessly from storytelling to musical accompaniment — so skilfully that it is
awe-inspiring.

And what a cast this is! You felt that even those in more minor roles could have stepped into a lead part at the drop of a hat.

The elderly Madame Armfeldt is a gem of a part, and Dillie Keane gave a gem of a performance, playing it for laughs but with perfect control.

The two main protagonists, Fredrik Egerman (Alastair Brookshaw) and his long-term lover Desiree Armfeldt (Josefina Gabrielle) had plenty of opportunity to showcase their talents, and did not disappoint in any way.

Brookshaw’s fine tenor voice was very impressive, particularly as he put over You Must Meet My Wife, while Gabrielle had the difficult task of putting her own take on the best-known song of the piece, Send in the Clowns, which she did absolutely superbly.

There have been literally hundreds of recordings of this favourite ballad, and yet she managed to make it her own, full of repressed emotion and very moving to the audience. You could have heard a pin drop, and the applause was well deserved.

Phoebe Fildes as Countess Charlotte Malcolm and Christina Tedders as Petra also gave distinguished performances that contributed hugely to the success of the show.

As we have come to expect at the Watermill, the design by David Woodhead, lighting by Howard Hudson and sound by Tom Marshall were all of the highest order, and special mention should be made of the choreography by Matt Flint.

To manoeuvre a cast of 13 round a stage the size of the Watermill’s is no mean feat — and yet this was accomplished in such a polished and pleasing way that it was a great tribute to his and the cast’s professional skill.

As always with Sondheim, you won’t go home humming all the tunes, but you will go home full of admiration for the talents of this wonderful cast, and grateful to have such high quality entertainment within easy reach of your doorstep.

A Little Night Music is running until Saturday, September 16. For tickets call 01635 46044 or visit www.watermill.org.uk