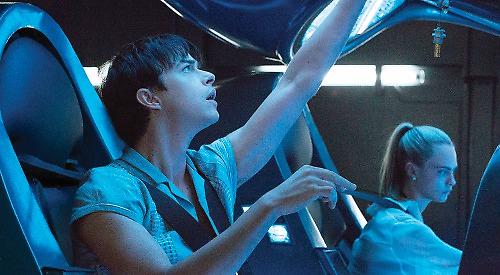 OUR French cousins, we are sometimes wont to forget, are very fond of their comic books.

And we’re not talking The Beano here.

Unlike us Brits, who still to a large extent regard the world of four-colour heroes as the preserve of children and their tragic kidult counterparts, the French and the Belgians have for years taken seriously the idea of what the rest of us later came to call the graphic novel — extended comic narratives aimed at “mature readers”.

In fact, they were way ahead of the game. Over here, the Franco-Belgian bandes dessinées that have tended to filter into our reading are those that appeal to all ages.

Asterix and Tintin are the most obvious examples, with the Smurfs finding greater success as a long-running children’s cartoon series.

All of the above have at various times been the subject of film adaptations, with varying degrees of success.

But with the rise and rise of the Marvel and DC cinematic universes, the business case for French and Belgian comics to get the same treatment is pretty clear. Vous faites les mathématiques, you might say.

So it is that the celebrated director Luc Besson, best known in the English-speaking world for Leon, The Fifth Element and most recently Lucy starring Scarlett Johansson, has come to make what is allegedly the most expensive French film ever produced.

Valerian and the City of a Thousand Planets, which hits cinema screens today (Friday), is based on the science fiction series Valérian and Laureline, which ran from 1967 to 2010 and was eventually collected into 21 large-format comic albums.

So no shortage of material to fire Besson’s imagination. (“It’s all I have,” he recently told an interviewer.)

Serving under commander Arün Filitt (Clive Owen), Valerian (Dane DeHaan) and Laureline (Cara Delevingne) are two spec-ops enforcers travelling through the myriad territories of the planet Alpha, an ever expanding and peaceful metropolis in the 28th century.

When a mysterious dark force menaces the eponymous City of a Thousand Planets, the pair must quickly determine who is behind the threat and then neutralise it.

True to his Fifth Element form, Besson has wrought a gripping adventure set in a breathtaking 3D universe populated by extraordinary creatures that make the Mos Eisley cantina look like The Muppet Show.

At least, that’s what the fans of the comics will be hoping.