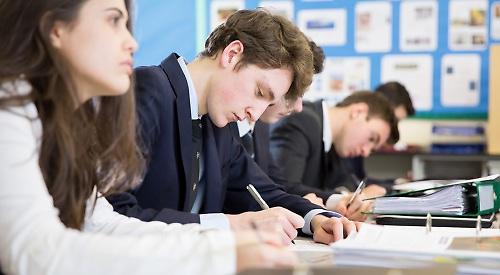 IS this the most difficult time to be a parent of a child in secondary education?

This is the ever-more pertinent question I am compelled to pose to the parents of young people now.

In this period of reform, advising our children on the opportunities beyond education is no longer simply pointing them down the path to university.

Put your hands up if you know what the GCSE grade C is on the new numerical scale?

These are the questions that need to be addressed.

As GCSEs and A-levels enter phases of reform, universities raise fees and change the structure of their courses.

It is now, more than ever, imperative that we as parents consider all of the options for our children when they leave education.

I talk to a lot of parents who, of course, want the very best for their children and are eager to impart advice.

The trouble is that the generation of parents of GCSE and
A-level age children now grew up in an era that is so far removed from what the university landscape is today.

This parent-generation was raised when the goal of attending university was all encompassing, no longer only a privilege of the very intelligent or the very rich.

This generation of parents were all allowed, indeed encouraged, to attend university.

This has meant that most parents are parochial when it comes to the options beyond sixth-form study.

In reality, the many paths available to students now are varied and diverse: European universities; studying in America; pursuing an apprenticeship; straight into employment.

How many of these do we consider viable options for our children?

It is not just a difficult time for parents. I feel strongly that parents in this geographical area are incredibly fortunate with the choice of schools; strong headteachers are at the helm of some of the leading primary and secondary schools in the country.

However, it is also a highly difficult time for these schools and all schools across the country.

Government funding has been, in no exaggerated terms, slashed.

There is talk in the media of a minimal increase in funding but this does little to counteract the previous cuts to school funding, which have proved so detrimental.

Legislation for educational institutions is through the roof. Schools have to spend more money and more time on health and safety child protection — even the ergonomics of sitting at a desk!

This is not just a suggestion, these are now legal requirements.

The recruitment of teachers is at an all-time low.

These are very real issues that all schools are facing. So what should the Government be doing? In a time when the powers that be are consumed with reform, I can’t help but wonder if what really requires the concentration of the Government is their very approach to reform itself.

Merely tinkering with the examination system is simply not enough; assuaging the disparaging media is not a noble goal.

A-level and GCSE results days inevitably bring with them the barrage of national newspaper headlines about examinations getting easier and the rise in A* grades being nothing more than a reflection of this.

There is little or no mention of any contributing factors to these fantastic scores.

Young people are belittled rather than praised for achieving this high level of work.

Pedagogy has come on in leaps and bounds; pupils benefit from kinesthetic learning and a move away from didactic preaching of years gone by.

Pupils themselves work harder; I know I can say with certainty that students are committing more time and effort to their studies than I ever did.

Enthusiastic and compelling teachers are finding unique and engaging ways to teach subjects, with thanks to available
technology.

Rather than just interfere with the examination and grading system, surely it’s time to look at other areas?

As we enter September, parents will be looking forward to the routine of the school day and teachers are eager to put eight weeks of preparation into action in the classroom, ready for the rhythm and routine of the working day.

Pupils themselves become despondent; the energy they had in abundance at the beginning of the holiday has slowly seeped away. Instead of changing the way we grade GCSEs, could we instead look at changing the structure of the school year?

Cutting the summer holidays and instead implementing four semesters would benefit pupils, parents and teachers.

It has been suggested that over the course of the summer holiday, pupils will lose a grade of knowledge because of the length of the break. More frequent and shorter holidays are a way to tackle this. Most young people nowadays have access to a laptop or computer and often email work to teachers.

And yet we still harp back to the almost-archaic pen and paper when asking them to sit exams.

The advent of the internet is another factor that has been thoroughly ignored in the reform of GCSEs and A-levels and yet is so wholly embraced in educational environments, in the workplace and in the social lives of many.

We no longer need to learn as much information as previous generations because it’s now instantly at our fingertips. And yet exams still exist purely to test memory.

Can’t the Government instead devise a comprehensive exam to test a pupil’s skills to manipulate the information readily available?

Are we as parents truly equipped with the necessary information to advise our children on the paths available to them? I’d say not.

Therefore we are placing our trust wholly in our headteachers and educational leaders to provide this support and information. Never have we, as parents, needed this help more.

I will close with this final thought: Can someone, please, put a headteacher in charge of educational reform for once?

Perhaps then, finally, we will see reform which is based on what is best for our young people in their world, which is so very different to the one in which we grew up.