Ageing theatre given a facelift 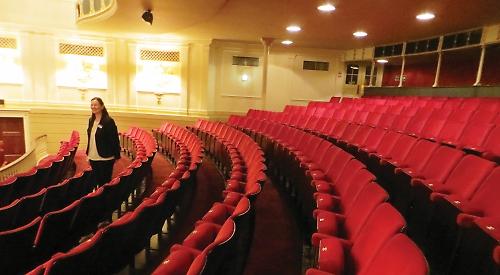 THE Theatre Royal Windsor is once more fully open for business after a busy few weeks of intensive refurbishment, writes Natalie Aldred.

In a £150,000 makeover which is still undergoing the finishing touches, with the help of Farrow & Ball and decorators AC Beck, the 600-seater Edwardian theatre, which was rebuilt circa 1910 after a fire and last redecorated in the Sixties, has honoured its roots in sympathetic tones of Radicchio red, Mole’s Breath grey and Cord beige, with feuille Wisteria grey wallpaper in the Circle Bar.

The chairs, which were removed to make way for scaffolding so that AC Beck could reach the ceiling and painstakingly pick out the finer details of the mouldings in gold, have themselves been reupholstered — and as there are a few rows still awaiting their turn, we could really see the difference.

As front of house manager Deborah Gallagher showed us around to see the improvements, it genuinely felt more spacious and refreshed and, dare I say it, less fusty.

So, next time you find yourself heading to the Theatre Royal, there’ll be more than simply what’s on stage to take in.