Tidswell's close-range tap-in earns side a share of spoils 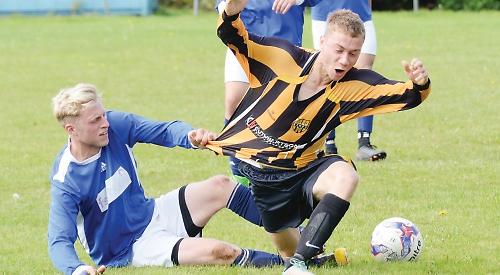 HOME side WOODCOTE/STOKE ROW surrendered a two goal half-time lead and had to settle for a point in their 2-2 Premier Division draw with NEWBURY on Saturday despite dominating most of the match.

All seemed well when Jake Dillon scored after four minutes with a lovely lob over the keeper after he was played in by Sam Tucker’s perfect pass.

Newbury looked dangerous in their few attacking moves and they could have equalised when a rash challenge handed them a penalty but stand-in keeper Ryan Corbett pulled off a good save from the spot kick.

Woodcote made it 2-0 when Jake Tucker fired home an unstoppable first time shot from Frank Dillon’s low corner. Before half-time, Frank Dillon had two good chances to increase the lead, the first bringing a good save from the keeper, the second clearing the bar.

On 70 minutes Newbury pulled a goal back after a defensive error and at the other end Frank Dillon’s pull back almost rolled along the goal-line with no one there to supply the finishing touch.

As Woodcote tired, Newbury got stronger and they equalised on 80 minutes. In the 85th minute there were good chances at both ends, but both went begging.

ROTHERFIELD UNITED drew their third match in four Division 1 games played as they were held 1-1 by MAIDENHEAD MAGPIES at Bishopswood.

In a game of two halves the Magpies dominated the first half, with Rotherfield restricted to long range efforts.

The visitors took the lead from a set piece when the ball rebounded to an unmarked attacker. Grant Wildish made several good saves to ensure the score remained 1-0 at half-time.

In the second half Rotherfield showed much more intent as Tom Candish and Simon Frost were pulled into central midfield and set the tone for the rest of the team.

Rotherfield equalised through Markland Tidswell after some good work from Joe Newman down the left saw his shot parried by the keeper and Tidswell was on hand to tap in from three yards.

Newman hit the post with 10 minutes to go and later saw his corner elude all Rotherfield attackers when it looked easier to score.

GORING UNITED maintained their 100 per cent record in Division 3 as they beat WOODLEY UNITED A 4-1.

Colin Williams and Simon Browne fired the league leaders into a 2-0 half-time lead. Alex Fletcher made 3-0 on the hour mark before Benjamin Fuller rounded off the scoring 10 minutes later.

Elsewhere in the division a much-changed HENLEY TOWN RESERVES side went down to a 3-2 defeat at MAIDENHEAD TOWN RESERVES.

Playing uphill in the first-half Henley started brightly with Nick Holzer being denied an opening goal after seeing his shot crash against the post.

The hosts took the lead soon after following a good breakaway move down the left wing which left Christopher Taylor in the Henley goal with no chance.

The visitors equalised just before half-time when Nico Cheesman was fouled in the area to win a spot kick. Cheesman stepped up to level the scores. Despite playing down the slope in the second half, Maidenhead started the brighter of the two sides and went ahead again when a ball from the right hand side found a striker in the area, surrounded by Henley players, where the ball pinged up off his foot to loop into the visitors’ net.

The visitors levelled again when Michel Millington was brought down in the penalty area. This time substitute Arron Finch scored from the penalty spot.

The hosts then piled on the pressure and scored the decisive goal on 75 minutes. Henley pushed for an equaliser with good play by Brendan Prior and Cheesman but the visitors could not find a way past the Maidenhead defence.

In Division 4 Jonathan Nicholas netted four goals to help GORING UNITED RESERVES pick up a point as the visitors drew 5-5 at MAIDENHEAD TOWN A.