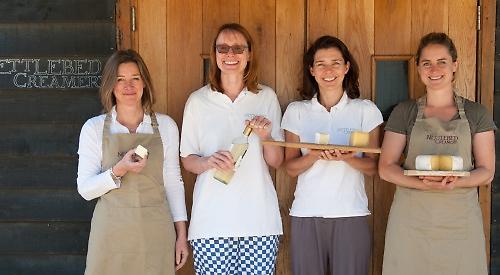 St Bartholomew cheese, which is made by the Nettlebed Creamery, has been added to the dairy range of home-delivery company Riverford Organic Farmers. Created in 2015, it is a semi-hard cheese made with unpasteurised organic milk from the family farm. It won silver at the 2016 British Cheese Awards and has reached the finals of this year’s Great British Cheese Awards, which will be announced on October 11. Rose Grimond, owner of Nettlebed Creamery, said she was thrilled to become a supplier to Riverford, adding: “We’re a great fit because we share the same ethical values and the same passion for good quality, organic food. It’s hugely significant for the creamery as it will open the door to 47,000 potential new customers, taking the business to a whole new level.” Picture are ???