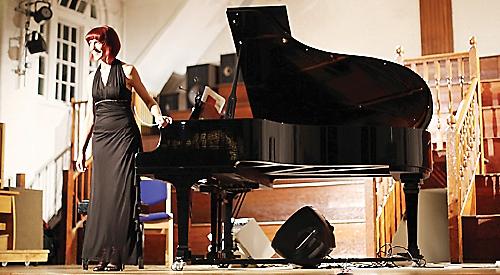 THIS was a quietly and sensitively announced piano recital at Queen Anne’s School in Caversham, held on an autumnal evening with a full moon rising as I parked in the car park, giving the sense of light you might find in a Magritte painting.

But this was much more than a school recital. It should be lauded as a major achievement with a performance that would have been fit for the Royal Festival Hall.

Piano Counterpoint is an arrangement by Vincent Corver of the American composer Steve Reich’s Six Pianos — a piece that requires skill and strength to play. Steve Reich has been called “our greatest living composer” by the New York Times and has a breadth of talent that sees his work encompass jazz, opera and the early form of slam poetry.

This piece could easily be reworked into a modern drum and bass track, it almost being a duel between the yin and yang of one personality, the pianist, playing with and at the same time against themselves — just as Eminem might in a popular track.

The closeness of the audience to the pianist and to the piano, not only means that you hear the amplified sound but also feel the vibration — from where I was sitting I could see the reflection of the strings of the grand piano in the underside of the lid.

After this powerful opening the composer Joep Franssens, who had worked closely both with the pianist Anita D’Attellis and Ian Haystead, who was in control of the mixing levels, throughout the day, gave a short talk on the ethos of the second piece we were to hear that evening.

He described how a composer uses music not words and that the pieces being played required extreme rhythmical precision, to the point that you are not quite sure, at points during the recital, which piano is playing the note you’re hearing.

The Gift of Song, which was here receiving its UK premiere, is a piece that reveals its secrets little by little and can best be described as a train journey.

The opening bars describe a sweeping shoreline, the listener then being taking through rolling countryside and hills and on to the mountains.

At points the combination of piano notes tricked the listener into thinking they were listening to a cello or a violin. There were moments when you listened to the silence as it punctuated the journey, like a door being closed and another opened.

This was a skilled performance in an intimate setting. Not your typical school recital.