It's not only the Brussels sprouts simmering away in festive farce 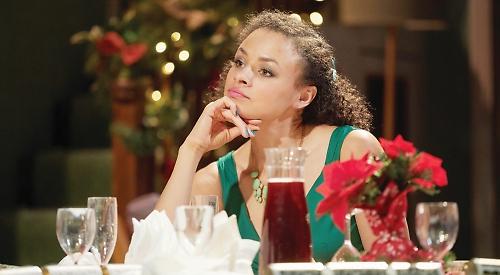 IT was time to get into the Christmas spirit — or, in some cases, spirits — with this look at the intricate dynamics involved in a somewhat fraught family reunion, laden with both tensions and comedy gold.

Matthew brings girlfriend Carrie into the family fold for the festivities on Christmas Day, along with elder brother Adam, his wife Nicole and (in the wings) daughter Emma. Matriarch Edith is awaiting the return of ailing paterfamilias Francis from his hospital quarters.

So far, so familial. Yet beneath the surface, it’s not just the Brussels sprouts simmering and bubbling.

In a crisp, clever device, each character was allocated their own kind of colour scheme, tallying with graphics indicating certain rules of behaviour they must follow.

So we were informed by a red sign that Matthew, dressed in red, must sit to tell a lie, while a green sign informed us that Carrie, in green, must stand to tell a joke, and so forth.

This was built upon in layers, which could have been confusing and hard work, but actually it worked well, was easy to follow and served several purposes, revealing elements of the characters and how their personalities slotted together, or didn’t.

Alongside this, we found out that the offstage Emma was undergoing CBT, which revealed that her own rules for living were too strict and severe. So this showed up how our flawed human transactions were all part of the games people subconsciously play and the little social habits that we develop to help us get by.

And finally, we could identify where certain behaviours were coming full circle, all as if in a series of festive party games.

The icing on the Christmas cake was the fact that as skeletons flew out of cupboards and the tempo got ramped up — including some wonderful pyrotechnics and a real roast — the crescendo enabled each character to finally be themselves, neuroses and all, facing a few home truths — although Edith’s credo “if you can’t say anything nice, don’t say anything at all” seemed to fall by the wayside.

There was perfect comedy timing, with Adam’s incredulity being a particular gem, while everyone seemed simultaneously to be archetypes, yet also fully fleshed out individuals, with their own wants, needs and failings. Not to mention a few choice phrases thrown out by Francis.

The beauty of this farce, with its moments of genius, was that it seemed to hold up a mirror to our own standards and expectations, and the realities of loved ones gathering together and all the ups and downs that entails.

As we left, we heard many snippets of conversation reflecting on madcap family experiences, showing that this show chimed with the loving closeness and mayhem inherent in many family quarters — our own included!