Motorised pair are fast friends and that's what really matters 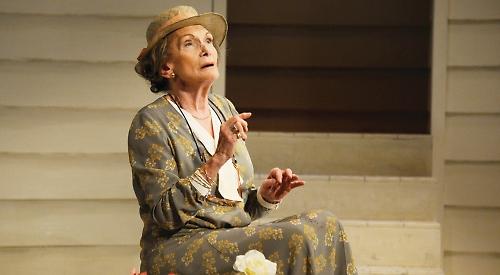 YES, Driving Miss Daisy meets the unpalatable issues of the American deep south head on: it addresses racism against blacks and Jews and still has something to tell us today about those things.

But, important as those are, they are the groundwork for the house built on top of them — that is, the House Of Friendship.

This revival is a triumph for the two stellar leads, Sian Phillips and Derek Griffiths. Their chemistry is so strong that it overcomes a bland, beige set.

The only thing that matters is their snippy encounters and you find yourself relishing the conflict safe in the knowledge that these two have become welded together.

Sian Phillips particularly is a lesson to anyone who thinks getting old is a handicap: she moves about the stage with a speed and agility which would put many younger people to shame.

Her decades of stagecraft mean every line is presented with conviction. What a treat to see someone like her perform. Driving Miss Daisy is about warmth and the coming together in later life of two people so far apart socially they might as well be in different galaxies.

Hoke is an illiterate black chauffeur while Daisy is a “highly strung” 72 year-old Jewish woman. As with many great enduring friendships, they struggle to get on at the beginning. But by the end their connection is so powerful they no longer need words to express it.

These are both good people who’ve developed cool facades to deal with a harsh world. At the beginning these icebergs crash into each other, but gradually they melt and the waters merge.

Daisy teaches Hoke to read and write, Hoke keeps her safe and cared for — with the aid of her loving and generous son, Boolie, played admirably by Teddy Kempner.

They are in Georgia in the mid-20th century — not a place to be black and not easy to be Jewish; they share more than they realise.

The nicely wrought script takes us through the post-war boom, anti-semitic violence, the civil rights movement and finally into an easier America — shortlived as it may have been.

They are quiet champions for each other but the awkwardness of their situation is confronted in the play: civil rights supporters Boolie and Daisy may be, but they still worry about being seen in a social situation with a black man for fear of what it will mean to the family business.

But in the end the only thing which really matters is the basic human desire for companionship and Ms Phillips and Mr Griffiths portray this so enjoyably that despite everything happening at the moment in this tumultuous world you emerge from the theatre thinking that there’s always hope.