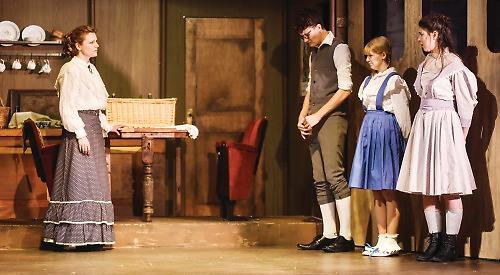 The productions at South Hill Park quite often have a subtle but ingenious way of drawing you in from the start — immersing the audience in the piece by having characters milling around with a bit of banter on the edges of the stalls.

This worked very effectively with The Railway Children, with busy passengers, steam and trains whistling, so that the stage became a busy platform.

Director Joe Malyan along with set designer Victoria Spearing and all the creative team managed to set up the illusion of a series of moments at the train station, with train carriage props becoming a home, with an upstage moonlit woodland walk area, to bring us this charming story.

Three London children and their mother find themselves facing hard times when the children’s father is taken into custody under suspicion of spying.

Arriving in rural Yorkshire, they run into linguistic challenges when the local kids tease them for their accents and posh words.

As their mother puts the children before her own needs, the children fall into several adventures involving danger on the tracks, a mysterious stranger from abroad, and a philanthropic older gentleman.

Luke Burton as Perks wrapped the story up as the narrator and Caroline Loveys was persuasive as the altruistic mother, while Roberta (Bobbie), Peter and Phyllis conjured up a bygone era of kids roaming free.

The railway setting was used to give the whole piece a great energy, and there were some terrific recreations of movements, train motions, and running alongside departing steam engines.

A miniature locomotive on tracks downstage set the whole things off, which my younger son loved, calling it a cute baby train.