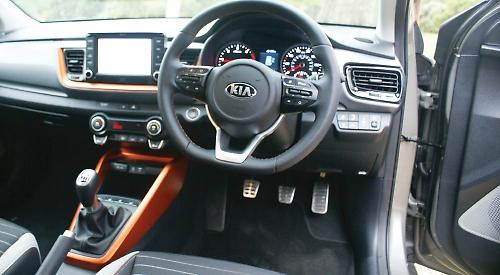 KIA, the South Korean carmaker, is on a roll and has no intention of letting up on a relentless sales drive with yet another new model — the Kia Stonic — launched in Britain last week.

The setting for the UK launch, a leafy, autumnal week at a hotel in west Berkshire, was fitting for a new car where its so-called First Edition version looked very much at home with its eye-catching two-tone paintwork.

This kind of dual-colour design has to be a winner with younger drivers and their passengers and is becoming prevalent among cars designed for a new generation.

One feature of the new Stonic’s First Edition version that caught my eye was that it follows the Kia Rio in offering USB ports front and rear so that mobile devices can be charged from any seat.

So the answer seems to be “give the kids what they want” and certainly I think with its bright paintwork, handy size and new media equipment it is bound to attract buyers.

There is a 7in display with a DAB radio and MP3 compatibility in grade 2, and in the First Edition this is upgraded to a 7in touchscreen navigation and infotainment system featuring Kia Connected Services with TomTom. Android Auto and Apple CarPlay smartphone integration are standard across the range.

Stonic is Kia’s first small SUV for the so-called B-SUV segment of the car market. Kia’s thinking is that “buyers are moving into B-SUVs from superminis, small MPVs and three-door compact hatchbacks”.

So it follows that Stonic is based on the latest Rio supermini and is powered by petrol and diesel engines from the Kia Rio and Kia cee’d family.

Originally intended as a car solely for Europe, it will now also be sold in Korea, such was the reception it got when shown there.

In Britain there is a five-model line-up based on grade 2 and First Edition trim levels. All versions offer a package including links to Android Auto and Apple CarPlay via pre-downloaded smartphone apps.

All Stonic models are front-wheel drive as the take-up for all-wheel drive in this sector of the market, says Kia, is “only eight per cent”.

The First Edition, because of its individuality, was my pick of the models shown here to the motoring press. This version’s roof, wing mirror casings and rear spoiler are picked out in either black, lime green, red or orange, depending on the choice of main body colour, and there are colour accents in the interior on the seats and around the lower centre console and display screen areas.

The exterior styling is repeated in the cabin, emphasising width and space. The number of buttons and switches has been kept to a minimum to give “a neater look and greater functionality”.

It lines up alongside a 1.4-litre multi-point injection naturally aspirated 98bhp petrol engine and the 108bhp 1.6-litre CRDi turbodiesel from the cee’d range.

ISG, Kia’s engine stop/start system to ensure no fuel is wasted and no emissions are pumped into the air when the car is stationary, is standard.

All versions are paired with a six-speed manual transmission and are front-wheel drive.

The fuel economy champion of the Stonic range is the diesel, which has a combined economy figure of 67.3mpg with CO2 emissions of 109g/km.

The 1.4-litre petrol engine, available exclusively in the grade 2 model, has economy and emissions figures of 51.4mpg and 125g/km.