Sadly, jukebox musical opts for happy endings all round 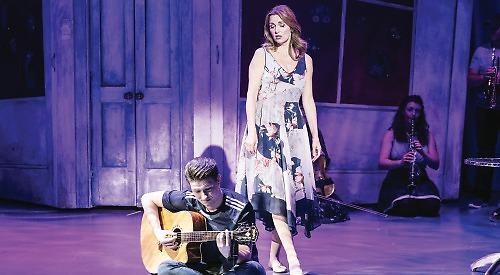 ALTHOUGH perhaps not the right generation to be a true Dusty Springfield fan, with her Henley links and the annual “Dusty Day”, I have grown up with her music and so was excited to see this musical based around her livery of songs.

The songs’ strong storytelling meant they worked perfectly in the context of a musical and the talent in the show was unquestionable — but I was not as convinced by the storyline.

The show follows the story of three generations of characters returning to an old music shop called “The Preacher Man” run by a man known for his wise advice, to seek guidance on their love dilemmas.

The Preacher Man has passed away and the shop is now a trendy café but it is still run by, you guessed it, the Preacher Man’s son.

Diana Vickers was sadly unwell and so Kat, in love with a boy on Tinder, was played by Jess Barker, but I certainly didn’t feel like I was missing out.

She may be lacking the “name” but not the talent. She had an incredible voice, was likeable and natural on stage and I really enjoyed her performance.

Comedy legend Debra Stephenson played Alison, recently widowed and struggling with her inappropriate feelings for a student. I love Stephenson as a comedy performer but wasn’t such a fan in this quite serious, musical part.

The final lead, Paul who was still in love with Jack, a guy he met 40 years ago, was played by Michael Howe, a serious performer who brought strong vocals with a beautiful tone to his voice.

Direction and musical staging was by Craig Revel Horwood, and unsurprisingly it was stunning. There was a beautiful flow to the piece, with fun dance numbers interspersed with moving, deep, modern set pieces.

I particularly enjoyed the dance between young Paul and the young Jack (Lewis Kidd and Liam Vincent-Kilbride).

There was also a Little Shop of Horrors-esque trio, the Cappuccino Sisters, played by Michelle Long, Kate Hardisty and Cassiopeia Berkeley-Agyepong. The three complemented each other perfectly and brought a sense of fun and drive as well as great harmonies and dancing.

Cassiopeia is a recent graduate but was a powerhouse in her first professional production and I couldn’t keep my eyes off her.

The other exciting element was that the cast played instruments live on stage. More regularly seen in a Sondheim piece, it was great to see this in a musical like this. “Spooky” was really special — no gimmicks, just talent, Michael Howe playing guitar with Ellie-Jane Goddard showing stunning vocals, before also stunning us with her skills on the saxophone. I really loved it.

My issue sat with the story. The idea of having a very real story about love being misunderstood in three different ways was refreshing. However, I am a hopeless romantic and still found myself hoping they didn’t all find love in the end.

It all came together too cleanly — I would have liked it if at least one of them had just been enough on their own for now!

Some of the one-liners were classic but the script did lack pace and felt a bit forced at times.

Go and see the show if you love Dusty’s music as the songs were performed brilliantly, but I wouldn’t rush to see it again.

Son of a Preacher Man is touring. The show plays at the Wycombe Swan from Tuesday, November 28, until Saturday, December 2. For full details, visit www.sonofa
preachermanmusical.com