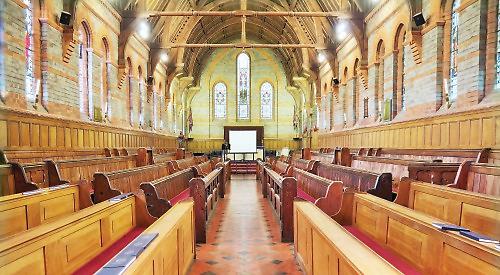 subject of the October talk was “The history of Reading School”.

The speakers were Ken Brown and Chris Widdows, who are former pupils of the school and co-edit a magazine, The Old Redingensian, which keeps former pupils informed about the school.

They began the talk by showing a short film about the Queen’s visit to the school in 1986 to commemorate the 500th anniversary of its
re-founding by Henry VII in 1486.

The school was established shortly after the founding of Reading Abbey in 1125 by Henry I.

Each year a service to commemorate the king’s benefaction is held at the Church of St Mary the Virgin in Reading.

The earliest mention of the school a charter of Roger, Bishop of Salisbury, in 1139.

In those early years, the pupils were taught by the Benedictine monks and the cloisters probably served as a classroom.

The school’s curriculum was focused on the training of young men for the priesthood.

When the school was re-founded as a royal grammar school in 1486 it moved into the abandoned Hospitium of St John erected to accommodate pilgrims visiting the abbey.

With the dissolution of the monastic houses in the 1530s, the school lost its main source of income and in desperation, the headmaster, Leonard Cockes, petitioned Henry VIII for financial support, which the king granted, funded by the sale of Cholsey Abbey.

In 1781 after a long period of decline, the school’s fortunes were restored under the long headmastership of Dr Richard Valpy. He largely rebuilt the school, mostly at his own expense, on what is now the site of the old town hall.

In 1830, he was succeeded as headmaster by his son, Francis.

By 1866 the school’s fortunes had again declined to the extent that only two pupils remained, so the headmaster resigned and the school was closed.

In 1867 the school re-opened and later moved to a 13-acre site off Erleigh Road.

The eminent Victorian architect Alfred Waterhouse designed the new school in the then fashionable neo-Gothic style at a cost of £26,000.

Today, Reading School is a grammar with academy status for around 800 boys. In examination results, it ranks in the top five percent of schools in the UK.

At our next meeting, Joan Dils will give a talk called “Threats to Reading’s health c1550-1900”. This will take place at the Abbey Baptist Church, Abbey Square, Reading, on Wednesday, November 15 at 7.30pm. All are welcome (£2 entry for non-members).