Mazda family aims to be planet-friendly 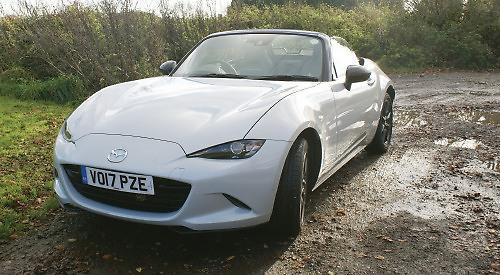 CARMAKERS’ research and development departments must at present be some of the busiest on the planet trying to, well, save the planet from the excesses of the motor car.

That’s the message that came out of a driving day I attended in the Cotswolds last week where the Japanese carmaker, Mazda, showed off its latest models.

But that wasn’t all: motoring journalists were treated to a teach-in on how Mazda plans to develop engines over the coming decades for “clean” and satisfying 21st century driving. It’s complicated, as they say, and probably a lot of motorists would not have the time or indeed, the inclination to take in all the technical detail.

But the big message I got was that Mazda is not yet throwing out the internal combustion engine.

Rather, what the Japanese carmaker aims to do is to “develop a petrol engine with the ideal internal combustion mechanism”. A spokesman added: “At Mazda, we believe that there is still ample room for further evolution of the internal combustion engine and that this technology has the potential to contribute in a major way to conservation of our global environment.”

So what you get is a new power plant that Mazda is calling the Skyactiv-X engine.

Mazda is therefore sticking to its guns and further developing the internal combustion engine.

The carmaker was naturally keen to show the benefits of this new engine. In a vehicle with 2.0-litre engine, for example, the Skyactiv-X delivers a 20 per cent improvement in fuel economy compared to Mazda’s earlier Skyactiv-G petrol engine. Where low vehicle speeds are used frequently, fuel economy can be improved by up to 30 per cent “thanks to the use of super lean combustion” in the new engine. Going back further: compared with Mazda’s MZR engine of 2008, for example, fuel economy is improved by a dramatic 35 to 40 per cent.

The car manufacturer plans to introduce its next-generation engine Skyactiv-X in 2019. From that year, it will “start introducing electric vehicles and other electric drive technologies”.

At times in the presentation Mazda did wax lyrical about the future, as in “through conservation initiatives, create a sustainable future in which people and cars coexist with a bountiful, beautiful earth”.

But purple prose aside you could see that its approach to future development of its cars and engines is nothing if not thorough. Back to the here and now, I took advantage of the day’s driving exercise to refresh my take on the latest Mazda models.

What is apparent with all carmakers these days is their intention of putting before the public a coherent “family” of models.

In this way, the cars complement each other throughout the range, with visible design links and, of course, engineering and mechanical similarities.

Mazda is no exception and has greatly improved its model range in recent years.

I had not driven the CX-5 before and hope to bring you a full review in the New Year.

For now, I found this handsome, large SUV (sport utility vehicle) a welcome addition to the Mazda range.

It is big and comfortable with a commanding road presence. And for a large SUV with lots of equipment this is a lot of car for the money (just north of £27,000 with options fitted).

I particularly liked the
CX-5’s comfort zone, which was generous and accommodating. And smartly turned out inside and out.

If you are looking into buying in the large SUV market I recommend you take the CX-5 for a test drive. Even non-Mazda drivers/fans will be surprised at how good it is for the money.

Next up was the CX-3 — again a car I’m sure I will be returning to because it is a smashing size, very adaptable and handy to drive and manoeuvre.

The AWD (all wheel drive) sport version I drove was quick off the mark (0-62 in 8.7 seconds), good on handling and not so bad on economy from its generous two-litre engine (44mpg on the combined cycle). Again, good value at a standard
on-the-road price of £22,895.

Finally, I had a fling with the wonderful MX-5 in classic convertible mode. This car, with the 1.5-litre engine, fairly hummed along the country roads around Tetbury in the Cotswolds on what was a glorious autumnal day.

Mazda says in its avowed long-term strategy how it will use driving pleasure — “the fundamental appeal of the automobile” — to help shape the future of cars. Look no further than an open-top drive in the MX-5 to fulfil the pleasure aspect.

• Continue efforts to perfect the internal combustion engine, which will help power the majority of cars worldwide for many years to come

• From 2019, start introducing electric vehicles and other electric drive technologies

• Begin testing of autonomous driving technologies currently being developed, aiming to make the system standard on all models by 2025