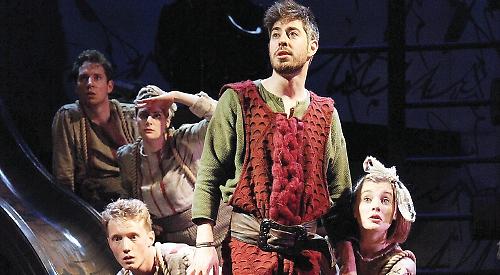 THE British children’s writer Mary Norton was almost as popular in her day as JK Rowling is today with her series of books about The Borrowers — a family of little six-inch-tall people who lived under the floorboards and existed by “borrowing” from the “human beans” who lived above them.

She wrote five books in all, with some speculation that she intended to write more, and these have been cleverly adapted for the stage by Theresa Heskins into one play, which is currently showing at the Watermill Theatre in Bagnor as their Christmas production.

The Clock family — father Pod (Matthew Romain), mother Homily (Charlotte Workman), and their daughter Arietty (Nenda Neurer) — are living happily in their rather confined quarters until first Pod and then Arietty are spotted by the human boy (Frazer Hadfield) who lives above them.

He is no threat to them, but the adults who live with him are, and this changes their lives for ever as they see no alternative but to “emigrate” to a safer place. So their adventures begin.

As usual with the Watermill, there are superb performances from the able cast of actor-musicians, and imaginative direction from the theatre’s artistic director, Paul Hart.

The set design by Toots Butcher does everything that is required of it to convincingly convey the idea of six-inch-tall people alongside giant human beings, but top billing surely must go to the props, which are superb.

The “borrowed” items are stars in their own right — a huge pair of scissors, cotton reels for stools, giant pencils, a huge cricket and a wonderful sardine tin that doubles as a very useful boat in which the Borrowers make their escape.

Prop maker Ruth Hills must have burnt some midnight oil for this show, and should be congratulated on doing a wonderful job.

The production is a delightful and charming piece of theatre, complemented by music by Tarek Merchant, but this reviewer would deem it a little too sophisticated for small children and considers that it would be as well for most children to acquaint themselves with the characters and storyline beforehand.

In other words, read the books first and you will enjoy both them and this production.

The Borrowers runs until December 31. For tickets and times, call 01635 46044 or visit www.watermill.org.uk