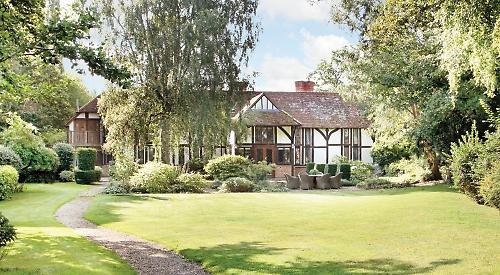 THIS week’s star property is a semi-rural five-bedroom barn conversion in the chocolate box village of Waltham St Lawrence — and it’s perfection in bricks and mortar.

There’s a different pace of life in Waltham St Lawrence — the pretty Berkshire village named after its ancient church and which separates Twyford from Maidenhead.

Here you’re off the beaten track in an olde worlde settlement replete with matching period properties. The village church and landmark local gastropub The Bell are the hub of the village.

Indeed, The Bell is a true “local” — remaining jointly owned by those who live here via a charity (of which the inhabitants of the parish and their heirs were made trustees in 1608).

Much as it was when these buildings were first built, the village is surrounded by countryside as far as the eye can see.

And yet a commute to either Twyford or Maidenhead (fast trains from Maidenhead to Paddington take 21 minutes) is a quick six to 10 minutes by car. When Crossrail comes on line next year, it will be even easier to get into the West End and the City in around half an hour.

Needless to say, living here you get the advantages of a semi-rural close-knit community with all the convenience of rail links, as well as the M4 corridor.

It’s the best of both worlds — and residents of this cherished village choose to live here for all these reasons and more. So the fact that there is a rather stunning five/six-bedroom character home for sale here, that needs no work doing to it whatsoever, makes for a very interesting prospect indeed.

The Tithe Barn takes its name from the traditional village barn for storing tithes due to the church.

However, it was only constructed in the Forties using reclaimed materials from an old country house and allegedly labour from skilled prisoners of war who were billeted close by.

As part of the Blaizes estate, the building had many additions and changes of guise over the years, including a stint as the village dance hall and as a school. But in 1965 the Blaizes estate was sold as three plots — the original house, the Tithe Barn and the neighbouring coach house.

But history has a way of lingering, and to this day, the latter two properties — both situated well away from the village road — are under a covenant that prevents the house names from being displayed at the road entrance.

Private and well hidden away, indeed.

In 2009 the house was acquired by its last but one owner — a successful hedge fund banker and local polo club owner, who was looking to create a weekend retreat for entertaining his family and friends.

Local architects were instructed, a well-known Chelsea-based interior designer was commissioned, and a two-year development commenced with no expense spared.

But fate decreed a different plan for the polo club owner, and the house was never occupied by him instead spending the next few years as a high-end rental property.

Fast-forward to 2014 and the Tithe Barn was bought by Emma and Andrew Yates, looking for a home to raise their young family.

“We could see all the advantages that come with a former agricultural building,” says personal trainer Emma.

With beautiful beamed high and sometimes vaulted ceilings, floor to ceiling windows, full-height entrances due to carts/tractors and plenty of open-plan space, these types of properties also make an ideal canvas for displaying objets d’art or playing with interior design.

“I think, this is partly why the Tithe Barn appealed to us so much, as younger, more modern-thinking buyers,” says Andrew, who is CEO of fast growing software company Artesian — recently named in the Deloitte Fast 50.

Emma adds: “Apart from the fact that there was no garaging, and the two chimney breasts needed stripping of their overgrown ground ivy, it was the perfect house.”

The design brief had been exceptional. So much so that the house won a design award in 2010. And with money being no object during the conversion and upgrade, this made for not only an extremely striking house but a very comfortable and luxurious one to boot — to the benefit of all those lucky enough to live in it in years to come.

Andrew explains: “The house is the result of one man’s addiction to polo and a brief to an interior designer which was to create loft-style city living encapsulated in what on the outside looks like a barn.”

Oak-framed wattle and daub on the outside, with floor to ceiling leaded glass windows, this building is deceptive. On the inside there is an astounding array of subtly unobtrusive high-tech wiring, and programmable lighting. This is a “fully connected” house with integrated sound and music — including in the garden — and cameras you can check on your mobile phone.

There is also underfloor heating in every single room, top spec insulation, double-paned windows and more.

Emma adds: “Before we bought it the house had only ever been rented — it had never seen permanent inhabitants. So although the Tithe Barn was our ideal house on paper, it was just ‘unloved’. It needed somebody to come along and make it into a proper home.”

Which is exactly what the Yates did.

And so it’s not the high-tech whistles and bells you when you first enter the property, but the mastery of architecture twinned brilliantly with Emma’s clever décor.

“The living room proportions are pretty big, so the trick was to find furniture and knick-knacks that wouldn’t be dwarfed by their surroundings,” says Emma. “You can have a lot of fun with a space like this.”

Thus we have extra-large table lamps, giant wall clocks, and substantial chandeliers, side by side with a generous glass dining table and welcoming squashy sofas and armchairs. There is even a vaulting horse from the 1916 Olympics (which were cancelled) with an interesting story. It’s an intelligent combination that shows off the room to perfection.

The house does have a side entrance via the guest wing, which is handy for the day to day. However, the main entrance via a double-height wood and glass lobby really delights. Along with washed flagstone floors and an “original” bell-pulley doorbell, Emma’s prodigious displays set the tone here immediately.

It’s a fitting welcome to such an impressive house.

Entering into the gigantic living room, you’re struck by there being an awful lot of wood and an awful lot of light. Indeed, this is most definitely the standout room of the entire property, with its stunning vaulted ceiling, towering polished-wood galleried staircase, oak panelling and not one but two feature stone fireplaces — both of which were in full blaze when Standard Property visited.

“However, looks can be deceiving,” says Andrew. “All of this was created in 2010 by the developers of the barn. Some of the materials, such as the oak wall panels and one of the stone fireplaces, were definitely reclaimed.”

Adjacent to the living room, the kitchen forms part of the more modern additions. “The main house only dates back to 1942,” says Andrew. A large space that’s big enough for multiple guests, yet somehow manages to remain welcoming, the kitchen is superb.

Andrew adds: “The previous owner had a reputation for throwing the most exquisite parties — this house had to fit the bill.”

Thus there are not one but two dishwashers, two wine fridges, a massive central island, a breakfast bar — the list goes on — all wrapped in polished pale marble and stainless steel. The garden, too, has several entertaining areas, so you can take your parties outside.

The other standout space of the house is the master bedroom suite. Temptingly spacious with a private wooden balcony overlooking the tree-filled garden (Emma: “It’s completely private — we’re surrounded by fields”) this is another impressive space. And like any “proper” master suite, it comes with a decent-sized dressing room as well as en suite bathroom.

Even though this master section is part of the more modern house wing, the developers have managed a convincing continuity which embraces the entire property. It means the whole house exudes a nice bit of drama and character charm, but with all the practicalities and comforts of a new-build.

And of the garage that was missing from what otherwise would have been the perfect house?

“I’m a classic car enthusiast so I wanted to make sure I got the garaging just right,” says Andrew. “I ended up commissioning a Northampton-based oak building specialist to create the ideal triple garage and workshop for a petrolhead.”

It was the last piece in the puzzle of what is now a very fine family home.

At the Henley branch of Savills, which is marketing the property, director of residential Nick Warner had this to say: “The Tithe Barn is a truly unique barn conversion, unlike any others in the locality. The main reception room, for example, would not be out of place in a house worth £5million or more, due to its impressive proportions and stylish design. Its central location in historic Waltham St Lawrence further adds to its appeal.

“The village has so much character, most notably the local pub which is a real landmark building and is also owned by a trust — it’s a proper old-fashioned village pub. Additionally to this, the whole area is going to be buoyed by the imminent arrival of Crossrail, which will help to better connect the region with central London, making it the ideal spot for commuters or those who want to enjoy the amenities of London.”

For Emma, it was the village that she fell in love with, and she regularly gets involved community projects such as a village-wide litter pick, or food shopping for the older residents.

“It’s got a great community and it’s a wonderful place to bring up a family,” she says. “You can walk across the fields at the back of the house and be at The Bell in five minutes — or to the church for Christmas carols.”

• Land: just over half an acre