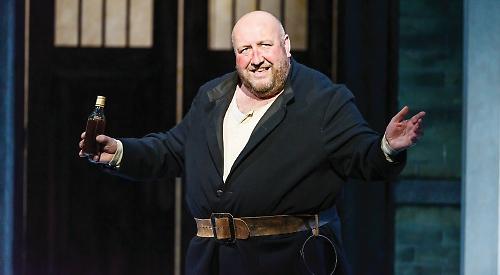 DIE FLEDERMAUS was the last in a run of three different productions performed by the Welsh National Opera last week at the New Theatre Oxford.

Friday’s performance, the penultimate one of the company’s two-month country-wide tour, was Sarah Crisp’s revival of John Copley’s 2011 production.

The libretto by Richard Genee and Karl Haffner has its origins in a French comedy Le Reveillon by Henri Meilhac and Ludovic Halevy.

Considered at the time to be too “French” for the Viennese, the original central act of an intimate supper party was replaced by a grand Viennese Ball, resulting in rather more gaiety and dancing, rather than indecorous seduction.

Die Fleudermaus is the ideal Friday night operetta — it is fun, more than a little frivolous and full of recognisable tunes by the great “waltz king” Johann Strauss II.

The spoken dialogue in operettas lends itself to comic plots, which with some clever substitution provides an opportunity to ridicule characters in contemporary public life.

Thus we had many entertaining moments and witty references flying back and forth, most notably by the drunk Frosch (Steve Speirs), a jail worker whose caustic jokes were delivered with deadpan expression yet had the audience howling with laughter.

Tim Reed’s designs for all three scenes were stunning. In act one the curtain opened to Eisenstein’s house, beautifully furnished in gold, cream, burnt-orange and peach.

There’s no doubt the inspiration for this came from several references by Falke to his friend Eisenstein to be sure to indulge in the “peaches and cream” at the ball, rather than go directly to the jail to serve his sentence.

In contrast, during act two at the ball, when Rosalinde, disguised as a Hungarian countess, sings her Czardas, the stage was transformed by the darker, rich-hued colours and dramatic lighting.

Both music and singing were of the highest quality one could ever hope to hear.

From the outset the playing was fast-paced, articulate and infused with a tremendous energy.

The overture was played in full before the curtain rose, allowing the audience to appreciate the many snatches of waltzes, polkas and marches heard in full later on.

Soprano diva Judith Howarth was a strong match for Mark Stone’s debonair Eisenstein, although she came more into her own in the Czardas where she impressed with her super-powerful high notes. Behind the façade we heard glimpses of Stone’s rich, polished baritone, albeit somewhat curtailed in this role.

Anna Harvey projected warmth into the “bored” Prince Orlofsky while Paul Charles Clark, with his stream of Italian arias, amused as the lovelorn Alfred.

The star turn was undoubtedly the dynamic singing of Rhian Lois, who played the ambitious parlour maid Adele.

Conductor James Southall deserves special credit for his masterly handling of the musicians on stage and in the pit. A lovely touch was to hear Strauss’s Thunder and Lightning Polka played for the curtain calls at the end.

What a treat to hear this world class opera company performing in such close proximity to Henley.