Morpurgo adaptation is true to horror and desperation of war 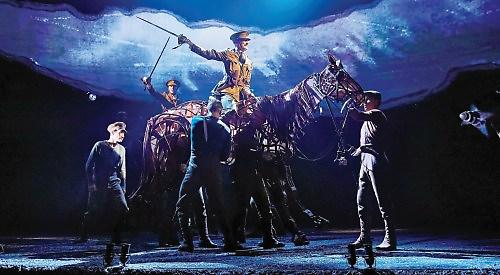 SINCE it was first staged in 2007, War Horse has acquired almost legendary status. Michael Morpurgo’s novel, adapted by Nick Stafford, has become a massive success in the theatre. So I went to the Oxford leg of the current UK tour with high expectations — and I wasn’t disappointed.

War Horse is a spectacle – there’s music, song, special effects and, most importantly, the remarkable horse puppets from Handspring.

The audience gets to know and love Joey, the war horse of the title, as a foal, acquired at auction by the obstinate Ted Narracott, largely to spite and win against his brother. Ted’s son Albert quickly bonds with Joey and, although the impoverished family can scarcely afford to keep him, Joey and Albert become inseparable.

Historical context is vitally important to War Horse — it’s essentially a play about the First World War. A recruitment drive for both men and horses sees Joey sold to the army by the venal Ted. The bond between horse and boy is broken — at least for now. Cousin Billy signs up and leaves the Devon countryside for France, to be followed later by Albert, in search of his beloved Joey.

The battlefield is effectively evoked through sound, light, images and choreographed movement. The trenches are depicted as a terrible environment for soldiers on both sides. But the horses suffer too.

Joey is now ridden by Lieutenant Nicholls and befriends another army horse, Topthorn. A disastrous cavalry charge sees Joey’s rider dead and the two horses commandeered by the German forces.

The symbiotic relationship between horses and people is a strong theme in the play. Joey and Topthorn represent the many horses who died in battle during the war.

Respect for the animals comes across in the craftsmanship of the horse puppets and the skill of the puppeteers, who clearly understand how horses behave and move; sitting in the audience, I knew I was watching puppets, but found it easy to believe I was actually watching horses.

We see many different people responding to Joey. When the horse finds himself trapped in No Man’s Land, soldiers from both sides collaborate with tenderness to free him from the barbed wire. Lieutenant Nicholls’s sketchbook, with its lovingly drawn images of Joey, features both as a plot device and a key contribution to stage design. But what about the human characters? The energy and stage presence of Thomas Dennis as Albert carries the show along. His upbeat performance elicits great sympathy from the audience.

There are convincing characterisations by numerous cast members, including Gwilym Lloyd as the foolish Ted Narracott,
Jo Castleton as his long-suffering wife, and Ben Ingles as the decent army officer who takes Joey as his mount.

Although War Horse derives from a children’s novel, it’s a serious play for everyone. This dramatisation is about the horror and desperation of war, presented graphically.

Be prepared to be moved, perhaps shocked, by the raw experiences and emotions evoked. But you will leave the theatre uplifted.

This first class production runs until January 6. Don’t miss it!