Couple to sell floating hotel after 14 years of cruising 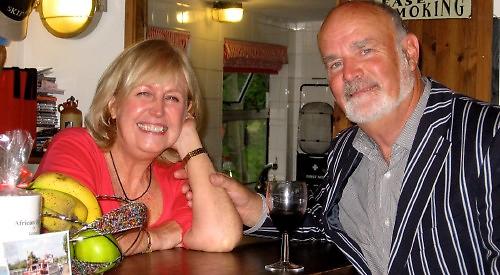 Bonny and Andy Cowley, of Homelands Way, Henley, are selling the African Queen after 14 years in order to retire.

The 98ft boat, which is moored in Mapledurham, has eight bedrooms, a large deck and sitting room with a bar and can take up to 12 passengers.

The Cowleys, who previously ran a successful hotel on the Isle of Wight, offer five-day excursions but say they are getting too old to continue running a challenging business.

“There’s a lot of stress with the boat as so many things can go wrong. It’s very, very complicated.”

She said the couple had a good start to the season last spring but then the company which sold their breaks, River Cruise Line Diamond Holidays, declared itself insolvent.

Mrs Cowley added: “We’ll be very sad to give her up. I’ve got very fond memories and I’ve met some wonderful people.

“She’s a quintessential English experience so we have a lot of Australians and Americans visiting.”

The couple bought the boat in Ireland in 2004 when it was moored on the River Shannon. The hull is thought to have been built in 1935 and she was converted into a hotel boat in 1970.

It took the couple nine months to transport her to Henley.

Mrs Cowley said: “We did the renovations on her on the towpath in Henley in 2005 and we started the business in 2006.

“We have had our ups and downs — we had the floods in 2007 right at the height of the recession.

“My husband would like to have another boat but not the stress of running it. Twelve people with three meals a day is hard work.”

The African Queen was fully booked for Christmas and New Year and the Cowleys will start the new season next month while they continue to market the boat. The couple had agreed a sale in November 2016 to a company called Anglo Cruises but the money never came through and the buyers disappeared.

In 2008, the African Queen was banned from mooring overnight at Mill Meadows in Henley because councillors said it was too big and a commercial vessel.

Mr Cowley argued that he had the same licence as a hire boat and shouldn’t be treated any differently .

He claimed that councillors were turning away tourism as the ban meant he couldn’t bring his customers into Henley in the evening.

He crossed swords with the council a year later when he was again accused of mooring illegally at Mill Meadows during Henley Royal Regatta.

He was ordered to leave but claimed the high level of the river meant he was prevented from moving his boat by the Environment Agency.

In 2008, the couple appeared on TV’s The Hotel Inspector when their venture was struggling to attract guests.

Presenter Alex Polizzi attributed their problem to some uninspiring marketing and the boat’s appearance.

A makeover and grand relaunch party marked a turning point in the couple’s fortunes as Polizzi found out when she returned for a follow-up programme three years later.