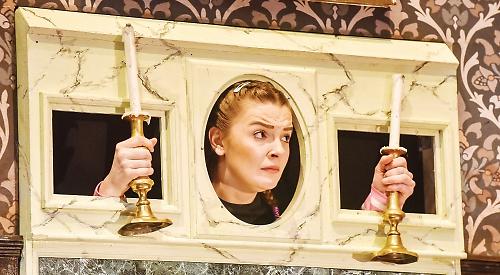 JUST over three years ago The Play That Goes Wrong came to the Playhouse, reduced me to a shaking barrowload of mirth, then moved on in a steady and inevitable progress to the West End.

I didn’t think it could get any funnier but you never know, so it returned this week and just after my sides had healed up after the first time they split all over again — and deeper.

The difference this time is that it’s been toughened up in the harshest performance conditions of all: London.

The changes have intensified the comedy — there are additional introductions from the nominal director which is more in the way of stand-up and which set the scene.

The physical and verbal comedy is spread more evenly throughout; where previously it had started as a Michael Green-like coarse play steadily getting more and more frantic, now it paces this.

The plot, such as it is, has an incompetent student drama group suddenly coming into a lot of money and therefore being able to stage and tour an elaborate and well-resourced murder mystery.

But, as countless businesses and government departments over the years have come to understand, throwing money at incompetence doesn’t get rid of it — it allows it to fail even more spectacularly.

Everything goes wrong — absolutely everything — and we become steadily more helpless with laughter as the hapless group of
no-hopers tries to pretend that all’s well.

Doors jam, or slam into actors’ faces, props go missing, cues are missed, the set disintegrates, and through it all they soldier on pretending nothing is wrong. Anyone who has ever done amateur drama will know the situations and will laugh all the more.

Hats off to director Mark Bell and especially the writing team of Henry Lewis, Jonathan Sayer and Henry Shields.

This really is a way of pushing back the January gloom.

Until Saturday, then touring. For dates, times and tickets, visit www.
theplaythatgoeswrong.com/
uk-tour/tickets