Third bridge 'would lead to more traffic in villages' 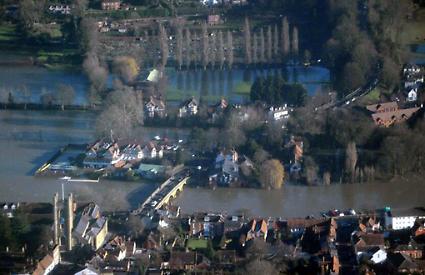 THE impact on South Oxfordshire’s roads of a third bridge across the River Thames in Reading has been understated, it has been claimed.

Representatives of villages to the north of the town, particularly those along the B481, say the £110 million scheme would tempt drivers to use rural roads as a “rat run” between the M4 and the M40 and no measures have been put forward to offset the resulting congestion.

They were speaking at a meeting in Highmoor, which was convened by the parish council.

Mr Howell, who is part of a group of councillors, MPs and business leaders investigating the feasibility of a new crossing, stressed that it was still at a very early stage and unlikely to progress for the foreseeable future due to a shortage of funding for more research.

Both Wokingham and Reading borough councils want the crossing, which would run across Caversham Lakes from the Thames Valley Business Park in east Reading to the Wyevale garden centre near Playhatch in South Oxfordshire.

But the county council and South Oxfordshire District Council fear that surrounding roads would struggle to cope.

Last year a £250,000 study commissioned by Wokingham council suggested there was a strong business case for building the bridge and it should be investigated further to avoid stunting the region’s economic growth.

It said the crossing, which would take just over 6,200 journeys a day during the morning and evening peaks, would reduce pressure on some roads like the A4130, which connects Hurley, Remenham Hill, Henley Bridge, Bix, Nettlebed and Nuffield, and the B478 through Sonning, including the village’s single-lane bridge.

The study accepted there would be small increases in areas like Greys Road, Henley, and Peppard Road in Emmer Green and Sonning Common but said drivers wouldn’t be tempted to take a shortcut between the two motorways.

However, at the meeting at Highmoor memorial hall on Thursday last week, opponents said the study was flawed as it didn’t look at traffic flows across a wide enough area and had only made predictions until 2026 when it should have considered a 30-year period to take into account the impact of future housing growth.

County council highways officer Llewellyn Morgan said even a small traffic increase through villages could cause safety problems as there were often no pavements and pedestrians had to walk in the road.

He said the study didn’t include “stress testing”, a prediction of the effect of an unexpected surge in traffic volumes. He said Reading council shouldn’t have included the project in its draft local plan without any mitigation measures, especially as it wanted to pedestrianise Reading Bridge so there could be additional pressure on Caversham Bridge.

Mr Morgan added: “The current assumption is that the bridge will redistribute existing traffic flows but there’s also the issue of suppressed demand.

“When you build something that gives you capacity, you have more free space for maybe five years but it eventually fills back up and you get back to the same problem you originally had. That should be considered as car ownership levels are expected to increase.”

David Bartholomew, county councillor for Sonning Common, Binfield Heath, Bix, Sonning Eye, Dunsden, Harpsden, Highmoor, Peppard and Rotherfield Greys, said: “There is rampant enthusiasm for this in Reading and it’s understandable because the Inner Distribution Road is always seized up and it’s pretty hard to get over the existing bridges.

“However, once you start talking about relief roads or bypasses, the cost could easily double and the whole thing falls flat on its face.

“We see the study as a draft document but the Berkshire parties see it as a business case. They’re keen to drive it through and worry about the details later.

“My greatest concern is that without mitigation measures, which have not been costed, we would have a bridge pouring traffic into our district with only two ways to go — up the B481 or the A4155 to Henley. Rush-hour traffic in Henley is already bad and any further increase would make it a nightmare.”

Catherine Walters, who chairs Highmoor Parish Council, said: “We are increasingly concerned that Reading is trying to push the project forward and villages along the B481 face significant increases in traffic on rural roads not designed to manage such levels.

“We understand the need for improvements but want to be a part of the wider debate as shifting traffic in our direction is not the solution.

“You can’t just move the problem out to the villages and make it impossible for me to cross the street with my dogs without the risk of being wiped out by a speeding lorry.”

Sonning Common parish councillor Leigh Rawlins said: “We’d be straight in the firing line for any new traffic. We recognise the issue and aren’t against the principle but we will not give Reading carte blanche to just crack on and dump their problems in our back yard.”

Rotherfield Greys parish councillor Nick Digby said: “I can see both sides but you need only look at the regular traffic problems on the M4 and A404 to realise that many people would see the new bridge as an alternative route to get on the M40.

“With all the new development South Oxfordshire faces on top of that, it’s a one-way street that wouldn’t be good for us.”